A 90-year-old California man has been forced to abandon his retirement after losing all his life savings in the Madoff Ponzi scheme. Ian Thiermann lived through the Great Depression and says he’ll get through this financial crisis too.

While it obviously must suck enormously to have $700,000 in life savings scammed by a heartless dooche like Bernie Madoff, there’s something kind of uplifting and downright affirmative in this little vignette.

As the infomercials say: But wait… there’s more! Obamamania will echo for a bit in the corporate media before they move on to the next big story.

Whatever. Close observers of such events may note with interest some of the remarks made by Stephen Harper in his “pitch” to a perceived American audience. More on this to follow… 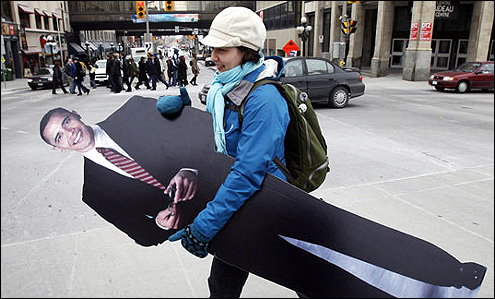 Consider this an open thread for all things related to the Obama visit. I have a crazy-busy day today so won’t be able to follow this “event” too closely, but will try to provide updates as time and/or interest allows.

Some resources (via National Newswatch):

7:57 — Interesting to note that Obama’s trip received absolutely ZERO coverage on the Today show on NBC other than a quick mention that the president would be in Ottawa, Canada… Correction: They just made note of it while rattling off the top news stories of the day, describing it as an attempt to “ease Canadian fears about protectionism.”

8:10 — Meeting with Governor General Michaëlle Jean running longer than scheduled. Twice the length of that accorded to Michael Ignatieff. Unprecedented! Reason ascribed to the “special connection” between the two… much talk of their “unique relationship” and so on. (i.e., They’re both “black” and have some common threads related to immigrant backgrounds, etc.)

8:25 — Meeting with the GG now over, Obama’s motorcade is headed to Parliament Hill. Pictures of his armour-plated, hermetically-sealed “beast” limo followed by numerous black SUVs driving down deserted, snow-covered roads. Could the creep-factor be any higher? I wonder how that limo got here… Minutes later, at the halfway mark and a CBC reporter standing roadside observes the motorcade speeding by, complete with police chopper overhead and decoy car (dummy version of the president included).

8:45 — After the fastest commute from the airport to Parliament Hill on record, the Eagle had landed arrived! Phony waves and smiles to the small crowd of people gathered to catch a brief glimpse of the U.S. president. Ridiculous protocol now underway… Shaking hands and some cursory chatter with the absurdly decked-out parliamentary officials, signing of the visitors book in the rotunda, and it’s rapidly up the stairs… to the land of mystery!

9:00 — While the key figures are off-camera, it’s time for the CBC reporters to talk to the Obamamaniacs and other loons assembled in front of Parliament Hill. After that, a few hours of idle speculation and flatulent punditry filling up the coverage until the next glimpse of the leaders is provided, so I’m going to step away and run some errands. I don’t imagine that I’ll be missing anything. Oh wait… the lunch menu! Pacific coast tuna, arctic char, applewood smoked plains bison, juniper and Niagara red wine, Accadian buckwheat something or other, etc. Nice to see they’re walking the walk when it comes to belt-tightening!

10:30 — Pics dribbling out now… History Made! Obama meets with “hottie” GG. Stephen Who?

11:30 — Blah, blah, blah… Filling time talking to the stragglers on Parliament Hill until the press conference due to start before noon. Oooo. Can’t you feel the palpable excitement of the platitudes of filial, cross-border solidarity to come? Not to mention the vague promises of billions of taxpayer dollars to be invested in completely fictional cutting-edge technologies like “clean coal” and “carbon sequestration” that will revolutionize energy production in the future!

12:40 — Fleeting press conference over. Great, we’re going to have a “clean energy dialog” now (see, I told you). Zzzzz. Excruciatingly tedious deconstruction and forensic dissection by assembled pundits doubtless to follow on. But now, departure from Parliament Hill… And “the wave” by Obama and “that other guy” (as described by someone in the crowd).

1:25 — While waiting for AF1 to be de-iced, it seems Obama decided to press the flesh at the Byward Market. An “amazing development” according to Don Newman. Some talk of “beaver tail” ensued, but sadly no footage of this momentous retail politicking was provided, so matters quickly turned to the aimlessly convoluted speculations of pundits, hacks and washed-up politicians.

And then… Obama sat down for a brief chat about the weather (and impromptu “beaver tails”) with Michael Ignatieff. Bob Rae was rumoured to be hovering in the background.

2:30 — Wheels up as Obama heads back home. So, what do you think of the visit? Despite all of the artificial time constraints, nasty media restrictions, microscopic stage management, and oppressive security measures, I’d have to say that from the superficial perspective of “relationship building” it has to be measured at least as a limited success for Team Harper.

Occasional reader and friend of the blog, Senator Elaine McCoy, documents the absurdities…

Senate employees are being advised to stay home tomorrow. Meetings have been cancelled. All parking privileges on or near Parliament Hill have been revoked for the day. Some streets are being blocked off; manhole covers have been bolted down; bullet proof screens have been erected; and rumour has it that everything down to the garbage bins and coat racks on the Hill have been checked out by secret service guys wearing dark sunglasses looking for possible (if improbable) security risks.

As the independent Tory representative from Alberta says: “All this for 6 hours of President Obama’s presence in Ottawa. What should be a festive occasion has turned into a massive display of fear. What does this say about our much-vaunted freedom and democracy?”

It’s unfortunate that our minority-elected government is inexplicably straining itself with massive exertions of state-funded power to forcibly suppress, muzzle and hide from view any expression of spontaneous public enthusiasm surrounding the new U.S. President’s initial “overseas” visit.

How undignified is it that our own Head of State has been forced by the PMO to clandestinely meet with him for just a few brief, undocumented moments in the pedestrian confines of an Ottawa airport lounge? Or that leaders of the official Opposition party have to grovel for a few scant minutes of face time with the new president? No address to parliament, no press conference, and heaven forbid, no photographs! The media has been ostensibly shut down, corralled, bullied and excluded from what the super-secretive, control-freak Harper Conservatives have deliberately contrived to be a hyper-secure, private and ridiculously discrete “non-event”…