In case you missed this last week, this extended interview was a classic take-down by Stewart as he just demolished McCaughey’s insane talking points about healthcare reform. The clip here is just a brief excerpt edited for the Rachel Maddow Show but you really should check out the complete interview (much of which didn’t air on the TV show) at either Comedy Central or the Comedy Network for the full effect.

If you’re unfamiliar with McCaughey, James Fallows at The Atlantic sums her up this way:

Elizabeth “Betsy” McCaughey also needs no introduction to Atlantic readers. She has brought more misinformation, more often, more destructively into America’s consideration of health-policy issues than any other individual. She has no concept of “truth” or “accuracy” in the normal senses of those terms, as demonstrated last week when she went on The Daily Show. Virtually every statement she has made about health-reform proposals, from the Clinton era until now, has been proven to be false. It doesn’t slow her down.

Coincidentally, in the wake of the TDS interview, which resulted in widespread ridicule of McCaughey’s claims, she immediately resigned from her position on the Cantel Medical board of directors.

Another week of comical drubbing for the zany kooks of the right-wing. 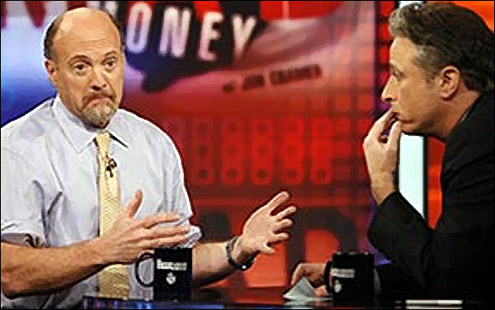 What an absolute thing of beauty tonight’s Daily Show was. Another “Crossfire” moment, I dare say. I cannot wait until the video is available… a transcript would be most excellent too.

In case you missed it, almost the entire half hour was devoted to a discussion between Stewart and Cramer about CNBC’s role in hyping the stock market bubble. When I say “discussion” it was actually more a case of Stewart lecturing and castigating an abjectly apologetic Cramer, whose cynical clowning was ruthlessly exposed with the help of this charming bit of video in which the host of Mad Money admits that he regularly manipulated the market when he ran his hedge fund. Calling it “a fun game” and “a lucrative game,” he suggested that all hedge fund managers act likewise. “No one else in the world would ever admit that, but I could care. I am not going to say it on TV,” he foolishly boasted.

Here’s a money quote (no pun intended) from the Mad Man of Wall Street: “What’s important when you are in that hedge-fund mode is to not do anything remotely truthful because the truth is so against your view, that it’s important to create a new truth, to develop a fiction.” Explains a lot, doesn’t it?

Update: Steve Johnson at the Chicago Tribune documents the scolding.

Stewart creamed him, if anything almost to a fault. He urged Cramer and his newschannel brethren to report rather than blindly trust what CEOs say (Cramer’s primary defense of CNBC’s lack of vigilance). But, really, Stewart didn’t report himself; he delivered a 22-minute opinion column, occasionally interrupted by Cramer shoulder shrugs, “okays,” and mea culpas plus, bringing in financial TV in general, wea culpas.

Unlike Santelli’s infamous rant, it was, as Johnson says, “good populism, well aimed and well delivered.”

Update2: Ta da! Here’s the clip (along with the usual caveat that it may be removed at any time due to copyright violation. Although, maybe Viacom will let it slide this time.)

How predictable that the only self-described “socialist” in Congress is the one person who can always be relied on to hold Wall Street accountable for its outrageous greed and tone-deaf excess.

Somewhat related to this, the other night on The Daily Show, Jon Stewart attempted to (again) promote his “trickle up” theory of economics while interviewing former Fed governor and corpulent Bush advisor Lawrence Lindsey, describing it as an “insurance policy against revolution.” Aside from being a wryly acidic comment on Lindsey’s own past writings, it spoke to what may well be a mounting sentiment of revulsion at the former “Masters of the Universe” that have wrecked the global economy for the time being through their willful ignorance, shameless arrogance, irresponsible behaviour, and obdurate stupidity.

What a nice summation: “widely distributed risk and narrowly concentrated reward” and “let’s not make the perfect the enemy of the essential”…

Is it possible that Jon Stewart is smarter than Fed Chairman Ben Bernanke?

Earlier this week, on The Daily Show, Stewart suggested in an offhand way, that simply giving the $2 trillion dollars in “stimulus” money (or bail-out money… whatever), directly to the American people for the sole use of paying down their consumer debt. Start everyone with a clean slate, or in other words, to use his expression, “hit the reset button” on the economy.

The logic has some merit to it. After all, the banks would get their money and consumers, free of their towering mountains of personal debt, would then head right back out and start spending; thereby doing precisely what the government wants them to do in order to reinvigorate the economy.

Now I know there are lots of reasons to argue against such a scheme (possible creation of systemic “moral hazard” for instance) but Stewart’s “fine idea” isn’t without historical precedent. According to Aristotle, the ancient Greek leader Solon instituted a set of laws called the Seisachtheia whereby all outstanding debts of the Athenian people were immediately forgiven and lands returned to their traditional owners.

I’d never heard of this hilarious online talk show that takes place in the minivan of a soccer mom before now.

What a shame Riggle is leaving TDS. He was one of the most consistently funny “correspondents” on the show.

Here’s a brilliantly incisive mockumentary from The Daily Show called “Reformed Maverick” describing the career of John S. McCain, from the so-called “Wild Years” (1936-2006) to “Abandoning Everything He’d Always Stood For” (2006-Present) using the film career of Marlon Brando as the thematic counterpoint (from incorrigible outlaw biker Johnny Strabler to corpulent parody and pandering talk-show guest).

“He started out as a maverick reformer. But now this reformed maverick is something even better: a winner. And he’s loving it.”

Are we sick of this woman yet? Boy, I sure am. If, however, you’re looking for more of the Muckraking Gone Wild that’s been churned out by frenzied left-wing blogs over the past several days, then head on over to Protein Wisdom for a compilation of all the “dastardly hypocrisyness” — it’s quite a horrific spectacle.

With that in mind, I’m going to pass for the time being on the “Dominionist stalking horse” clap-trap and just stand firm in thinking it was a grievous error of judgment on the part of McCain to pick someone so manifestly unqualified for the position, notwithstanding whatever it may be worth in terms of galvanizing the far right and righter elements of the Republican party (a healthy spike in campaign contributions, we know that much already).

So, without further ado, here’s Jon Stewart’s more lighthearted take on the pick from last week:

Jon really doesn’t have to work that hard some days, when there’s people like Fox’s Steve Doocy insisting that of course Palin’s got foreign policy experience, because Alaska is right next door to Russia!!! I believe that potential future First Lady Cindy McCain said exactly the same thing the other day. Amazing.