CNN unwittingly demonstrates with this sorry spectacle why so many people have come to thoroughly despise the mainstream media.

By the way, if you want to read an interesting article on this subject, let me recommend an excellent piece that James Fallows wrote in The Atlantic a number of years ago.

“When I see clips like this, I just want to give up.” – Chris Hayes

Nice to see that Fox News is protecting its vaunted “fair and balanced” journalistic integrity by suspending the contracts of a couple of its many hired contributors that are now, or have indicated that they may possibly be, running to become the 2012 Republican nominee for President of the United States.

Surely, if nothing else, this absurd dilemma points out the fact that Fox News is little more than a free publicity machine for right-wing hacks, if not an egregious agit-prop wing of the Republican Party.

Oh by the way, when is that Sun TV News channel going to start up in Canada? You know, the one that’s going to provide “Hard News and Straight Talk”… Just thought of that for some odd reason.

The question on this afternoon’s edition of “The Cafferty File” segment of CNN’s The Situation Room program was an especially provocative one; asking if, in light of the blatantly insulting snub by the reactionary government of Benjamin Netanyahu when Vice-President Biden recently visited that country, it was perhaps “time for the U.S. to get tough on Israel”…

Not that it will ever do so given the entrenched power of the influential pro-Israel lobby (e.g., AIPAC and so on) in Washington, but maybe now would be a good time to revisit the idea of funneling countless billions of dollars each and every year to supposedly “friendly” client-states around the world.

Considering the heinous insolvency of the U.S. these days, wouldn’t it be prudent to critically re-assess the value of maintaining a far-flung global empire comprising more than 700 military bases scattered about all corners of the planet and backstopping truculent, nettlesome “allies” like Israel or repressive autocratic fiefdoms such as Uzbekistan or Saudi Arabia?

I’m sure Olbermann will indeed miss hamming it up with his baleful, slurping impression of (now former) CNN anchor Lou Dobbs. But hey, he’s still got a popular radio show on 160 stations…

Actually, aside from his constant harping on about illegal immigrants and nutty right-wing conspiracy theories like the “North American Union” and such, I didn’t mind Dobbs that much. I hear Sarah Palin is looking for a talk show, so maybe she could fill that slot on CNN.

One of the few good things on Fox News…

Meanwhile, CNN is mucking about trying to fathom the “huge mystery” surrounding the clandestine amendment inserted at the last minute by Sen. Chris Dodd (coincidentally, the number one recipient of AIG political contributions) into the stimulus bill legislation that modified it with regards to executive compensation — an artful contrivance that effectively created a loophole allowing the contentious “bonuses” to go forward. And why would that be? Well, the latest explanation seems to be that the unit dealing with credit default swaps was so impenetrably confusing to senior management of the company that it was necessary to retain the unique expertise of the traders involved to decrypt and unravel the very mess they’d created.

Uh-huh. A likely story… Sheesh! Who do these sleazy traders think they are — computer programmers, or something?

Update: The plot thickens. By various twists and turns, a new (old) spin on the pre-February, 2009 carve-out in the stimulus bill emerges. Well, whatever. As I said yesterday, this whole AIG bonus fiasco is a piffling (albeit highly entertaining) distraction in the scheme of things.

The flip-side to the previous post. Harper appeared today on CNN’s Situation Room with Wolf Blitzer.

The video comes via the Conservative Party that has, in typical fashion, disabled the ratings and comments. Thou shalt not downrate nor shall ye comment unfavourably on the Dear Leader! Look only in wonder and awe, feeble mortals!

The best thing to happen to CNN in a long while.

And in other good CNN-related news, Glenn Beck has moved to Fox. About time. Good riddance. Oh, and I see that they’re already looking for a replacement. 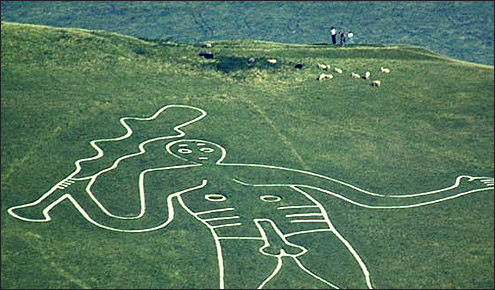 Jeff Jarvis may well be right about political conventions these days being nothing more than contemptible “staged events to get media coverage” and therefore not worthy of reporting on, but they’re tailor made for the quirky news stylings of CNN’s veteran correspondent Jeanne Moos, whose “beat” is the offbeat, so to speak.

In today’s “Moost Unusual” bit, she zeroed in on a giant pizza cut into a wheat field near the Denver airport for Papa John’s that delegates (and the 15,000 reporters as well, presumably) to the Democratic National Convention will see as their aircraft are landing. To pad out the piece, Moos did a quick review of other giant “crop circle” advertisements as well as assorted giant figures cut into farm fields across the country and around the world.

Which brings us to the so-called “Rude Giant” (also known as the Cerne Abbas giant or, more simply, the “rude man”), a chalk figure carved into a hillside in Dorset, England that dates back to the late 17th century, although its precise origins are unknown. Some historians have speculated that it may have been a parody of Oliver Cromwell, the regicidal English dictator. Cromwell was, of course, a fanatical Puritan and if he was aware of the Cerne Abbas, doubtless would have found its giant phallus highly offensive.

The puritan spirit lives on at CNN apparently. For whatever reason, the network felt obliged to censor the Rude Giant’s “naughty bits” by pixelating them when they appeared in the Moos piece. The reason was probably less to prevent their viewers’ delicate eyes from being offended, than to avoid bothersome complaints about broadcasting something “obscene or indecent” in violation of the FCC regulations, but in either case, it seemed quite strange for a “news” network in the 21st century to apply that standard of prudery to a four hundred year chalk carving. For a country that treasures “free speech” and holds up the first amendment right as being almost sacrosanct, the daft constraints imposed by the archaic FCC regulations on broadcasters utilizing the public airwaves seem like a terrible contradiction to the right of free speech in this day and age.