Nice to finally see the backside of the last year. Good riddance!

Your mileage may have varied of course, but it was a fairly craptacular year by most standards (e.g., “global economic meltdown” amongst other shitty things that happened) and personally one that I’d rather forget for various reasons.

What if there were no stop signs… and a major corporation was charged with inventing one?

A snapshot of life through the eyes of a Marketing manager… and yes, sad to report that the so-called “creative process” really does work this way quite frequently.

And one would expect anything else in the profoundly silly place formerly known as “Scarborough Country”?

Regarding Bush… Completely useless to the Bitter End. 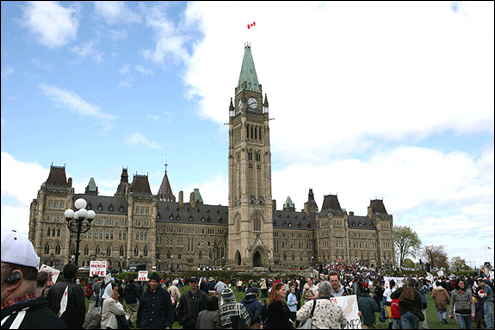 Does anyone have a current list of members from all parties that make up the “Parliamentary Pro-Life Caucus” (PPLC) that Conservative MP Rod Bruinooge (Winnipeg South) was recently “elected” to head up?

If almost half of Canadians (42 per cent, according to a recent Angus Reid poll) apparently want abortion to be subject to greater restrictions, then why is this group of MPs (reputed to be as many as 70 or as few as 25 in number) so deeply shrouded in secrecy? Illustrative of how absurd this situation is, in a story this morning ostensibly about whether the new Liberal Leader will allow MPs to continue to advocate openly for reduced access to publicly funded abortions, Ignatieff spokesthingee Jill Fairbrother states that it’s “impossible to know if the committee mentioned by Mr. Bruinooge even exists.”

Well, presuming for the sake of argument that it does actually exist, then isn’t it reasonable to demand that the members of the PPLC be forthright about their participation in this group rather than furtively advancing their religious “anti-choice” agenda in secret?

You have to love Don Lemon’s polite incredulity about the CD distributed by RNC chair candidate Chip Saltsman which included the now wearisome Barack the Magic Negro song.

“I’m not going to call anyone a racist here, but come on… these are grown men and you have to suffer the consequences of whatever you do. I mean sending it out to members of the RNC… Shouldn’t — shouldn’t they know better? It’s just silly.”

MSNBC’s Tamron Hall was somewhat less reserved in her reaction to the term “Magic Negro” irrespective of its purportedly satirical intent.

Funnily enough, the remarkably “tonedeaf” gesture may have inadvertently helped Saltsman’s bid to become the next leader of the Republican Party.

Ever wonder what would your name be if Sarah Palin was your mother? Well now you can find out!

Oh no! Not another fantastically lame contest devised by the CBC braintrust to help “define” us… Urgh.

It seems that Canadians are being challenged by CBC Radio 2 to nominate 49 examples of our “mighty distinctive music.” (*cough*) for the next U.S. president “to groove to as he takes office Jan. 20.”

Good grief, how pathetic. I’m normally a pretty staunch defender of our public broadcaster, but when they indulge in puerile exercises like this the dismissive contempt with which some regard the CBC seems entirely deserving.

Update2: My suggestions for this travesty…

Glad I wasn’t the only one to notice Caroline Kennedy’s highly annoying “verbal tic” (according to Politico she said “you know” a staggering 138 times in her recent New York Times interview).

“It’s really, you know, it’s not about just the Kennedy name,” Kennedy said. Uh huh. Thank goodness she doesn’t also punctuate her sentences with the word “like” — another terribly difficult habit to break.

Should we be in the least surprised that Bristol (named after a sheet of cardboard) has given birth to a bastard named “Tripp” sired by “Levi” (yes, rather unimaginatively named after the venerable brand of jeans, although the spelling is off) and whose uncles are “Trig” and “Track”?

Israel kept up its bombardment of Gaza overnight expanding its targets to include an Islamic university and government buildings. Witnesses said the Islamic University was struck at least six times and the interior ministry headquarters levelled by bombs.