From this morning’s Washington Journal program.

The Financial Times reports that Wall Street executives are “enraged” about the compensation limitations of the new Obama administration’s new recovery plan. Numerous bankers warn that these pay caps will lead to a “brain drain” in the financial industry. 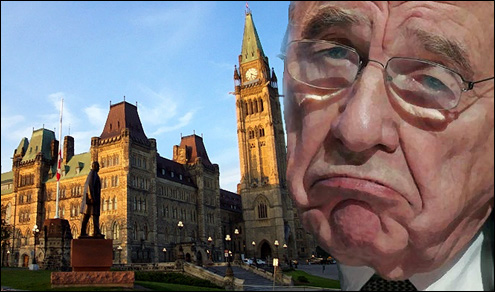 It’s heartening to know that Stephen Harper’s former speechwriter (now a “public affairs analyst and commentator” — whatever that means) is so deeply concerned about the lowly fortunes of Rupert Murdoch’s Fox News Channel in Canada that he felt compelled to weigh in with some free advice in the pages of the National Post on how the struggling cable news channel could potentially expand its market north of the border.

You see, it’s vitally important that we gain more exposure to Fox because the “majority of Canadians are left-of-centre” and are tragically afflicted with a “nanny state mentality” that persists, “no matter how hard [Conservatives] try to eliminate it.” Furthermore, the positions of Canadians “on issues like the war on terror, environment, health care, crime, and the military” often leave “something to be desired.” Why, the situation is so woefully appalling that even “a fair chunk of Canadians who claim to be conservative really aren’t.” According to Taube, they’re just slightly to the right of your average Swede.

Alas, poor Taube then applies his expertise as an “analyst” to the news-watching habits of Canadian viewers:

My guess is that substantially more Canadians watch CNN and BBC than FOX. There are likely a variety of reasons, including: Perceived political bias, presentation of news coverage, comfort and name recognition, additional cable charges to view FOX, and availability in specific areas.

It’s a reasonable assumption, even though Taube admits he has no actual facts to back it up. As for his “likely” reasons, aside from being highly suspect and supported by nothing but Taube’s imagination, one wonders they were deliberately ordered in that fashion because I think it would be fair to say that if they were prioritized in terms of likelihood, he’s got them precisely backwards. The key reason that Fox’s ratings are low is that it’s not currently included as part of the basic cable packages offered — period.

Can this be improved? Sure, but it’s highly unlikely that the CRTC will be offering FOX on basic cable packages anytime soon.

Um, I could be mistaken here, but aside from requiring the cable companies to have 51% Canadian content and the application of some arcane requirements about “genre protection” and such, the CRTC doesn’t determine which news channels the cable companies decide should be included in the packages they offer. But never mind that minor quibble, I digress.

Let’s return to the thrust of Taube’s mission here, which is to boost the ratings of Fox amongst the benighted viewers of Canuckistan. Having earlier lauded the work of Bill O’Reilly by echoing a stellar review cited in the National Post (go figure) that described him as a “gifted questioner, deceptively so because of his unslick, working-class demeanor,” Taube suggests that he and other Fox personalities “should host an episode or two in Canada.”

It would increase their international exposure, and generate some media publicity. And if they avoid making jokes about Quebec – something comedian Conan O’Brien learned first-hand when he taped some shows in Canada in 2004 – they’ll come out smelling like roses.

Wow. What a terrific idea! Can’t you just imagine the fun? I sure can…

I think sending ignorant right-wing clowns like Billo, Hannity and Beck to do their strident, bellicose shtick in Canada would be massively entertaining. Perhaps while Billo is here, we could even ask him how that national trade boycott of his is coming along… Say, does anyone have a copy of the Toronto Business Review handy?

h/t: Thanks to Olaf for bringing this to my attention.

I was trying to explain this new form of interface to someone last night, but it was difficult to get across how remarkably innovative is without seeing it actually demonstrated.

Called “Siftables” these cookie-sized, interactive, computerized tiles devised by MIT grad student David Merrill are capable of performing math functions, playing music, and “talking” to one another. The possibilities are endless…

I think this is the first TED lecture where I’ve seen the audience break into spontaneous applause at a demonstration. Little wonder — it is incredibly neat. 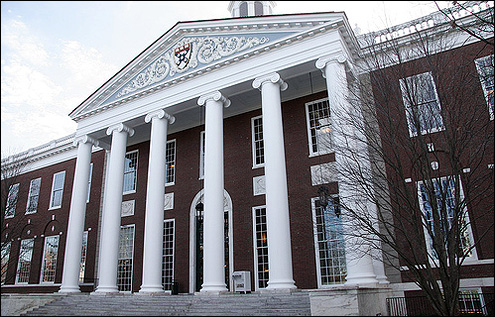 Should we care about the fact that both Liberal leader Michael Ignatieff and U.S. president Barack Obama were formerly professors at Harvard University?

Probably not, although it certainly cuts the legs out from the Conservatives’ facile line of attack about the Liberal leader being an “out of touch professor” and their sneering derision for “intellectuals” and others that have immersed themselves in book learnin’ and other such effete pursuits. 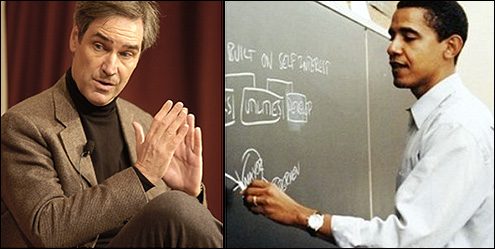 It could also be argued that it doesn’t hurt to have have friends in high places, in addition to sharing a common connection, not only with the new U.S. president and several of his top advisers, but also the dozens of Harvard alums that populate the upper levels of the Obama administration.

Russian Television has a regular “man on the street” (MOTS) segment where they send their New York correspondent Lori Harfenist (aka “The Resident”) to find out what people in Manhattan think about… stuff. Needless to say, some of the responses are quite, um, interesting.

In view of the Obama administration’s suggestion that they may be willing to make overtures to elements of the Taliban that might be open to peace-making efforts in the region, this week’s question: Is it ever a good idea to reach out to the Taliban?