The timing of this foolish distraction is fairly suspect, to say the least. Does anyone think for a moment that the Sun didn’t have this story in their back pocket all along? That they chose to drop it two days before the election indicates the frantic last-minute desperation of the Conservative Party media to derail the NDP and their dreaded “socialist hordes” as much as anything else.

By the way, doesn’t getting a “rub and tug” in a cathouse pretty much describe the daily activities of the Sun’s pundits (sometimes laughingly referred to with great irony as “journalists”)?

p.s. Does anyone else think that it’s totally weird that Sun TV thought it necessary to dramatically interrupt their regular programming with this “breaking news” about an “exclusive” non-story from 16 years ago?

Or… you could just be a rather dim-witted asshole.

I haven’t been following politics all that closely of late (far too boring for words), but some things are simply irresistible.

As to whether Poilievre is a racist, we can’t possibly know that with absolute certainty when the likelihood that he’s nothing more than an odious nincompoop (as many MPs are inclined to be, sadly) is just as probable, if not more so.

While we’re on the subject of defamation, a lawsuit brought by three women whose photos appeared in the book Hot Chicks with Douchebags was dismissed the other week by a New Jersey judge.

Superior Court Judge Menelaos Toskos ruled that author Jay Louis’s 2008 book was “replete with obvious attempts at satirical humor,” and that the inclusion of the women’s photographs were “used for humorous social commentary.” Toskos, who reported that he “carefully scrutinized” the Simon & Schuster title, pointed to several passages showing that the book was obviously satirical.

“For example,” Toskos wrote, “how can a person reasonably believe that in 1981 archaeologist Renee Emile Bellaqua uncovered in a cave in Gali Israel a highly controversial Third Century religious scroll suggesting that the “douchey/hotty” coupling was a troublesome facet in early social religious structures?” The 60-year-old jurist also questioned whether a reasonable person could “believe that Jean-Paul Sartre stated ‘man is condemned to be douchey because once thrown into the world he is responsible for every douchey thing that he does.’”

Smoking Gun has the complete opinion which is quite amusing.

“I am very sorry to see what’s happened to John… I don’t think his campaign is being well run. It’s been over-managed. He blew through $8.5 million. It’s a difficult thing to leave a friend and go to another friend. But we lost the John McCain I knew.” That was John Dowd throwing his former client during the Keating scandal under the bus for Fred Thompson just a few short months ago.

Update: And then there’s this side of the story.

Perhaps like literally dozens of people, you’ve been breathlessly following the latest scandal du jour whipped up by that execrable mole Steve Janke — “Turnergate” I believe some BTs have taken to calling it. Maybe it says something about the dreadful smallness of our politics when something as trivial as the identity of an individual at a televised door-knocking opportunity gets turned into the subject of supremely phony outrage by the Harper team’s volunteer online operatives.

You have to love the ironic punch-line at the end of Ormiston’s piece. Turns out the Conservatives did much the same thing as they’ve been excoriating Turner for, by inviting CPAC to interview a local shop-owner without disclosing the fact that she was the wife of the Conservative riding association director. Of course, there’s no mention of that by Janke or Taylor. Douches.

Not that it’s been in much doubt for the past several weeks ever since the “straight up guy” in the slimming blue vest started spinning his laughably feeble pretext for an election, but after today’s pointless meeting between the PM and Stéphane Dion, it’s virtually certain that there will be a federal election on Oct. 14, which also happens to be a Jewish holiday.

“[Harper] doesn’t want Canadians to have too much time to see he is ill-prepared to face the economy . . . he doesn’t want to face byelections,” Dion told reporters after the 20-minute “charade” during which he apparently berated Harper for breaking the spirit if not the letter of his fixed election law.

As to why the government is making a mockery of the law they introduced not long ago specifically to prevent the “government of the day be able to play around with the date of an election for its own crass political motives,” to quote a Conservative minister talking about Bill C-16, Tory spokesprick Kory Teneycke simply repeated the narrative he’s been pedaling to reporters for the past two weeks. “Mr. Dion could find no area of common ground with the government to move forward with a legislative agenda,” he said.

When asked about specifics of the “legislative agenda,” or queried as to what exactly he meant by “a number of things that government would like to move forward on,” Teneycke … Wait a minute, this is the liberal media we’re talking about. They never asked him those questions! Silly me, what was I thinking? No, instead, we got Mike Duffy, CTV’s morbidly obese cut-up, back from two months of basting his corpulent pile of flab in the sun, pronouncing that Dion, just as the Tories expected, had stupidly fallen into their oh-so-clever trap and that now Harper “will be able to say on the campaign trail that he tried to work with the opposition.” How fucking brilliant.

So, get the “Straight Up Guy Express” on the road ASAP and let the barefaced lying, pandering and skullduggery commence! We’ve got an election to endure.

Update: Somewhat related to this, there’s a hatchet job from this Drudge wannabe about Dion’s upcoming junket in Winnipeg. Oh, and don’t forget to contribute to the Conservatives’ favourite muckraking dirtbag while you’re there — now in convenient denominations of “$25 – $50 – $100 – $250 – $500 … Other” — consistently losing NASCAR races doesn’t pay all the bills you know!

Let’s see what “average Guelphite” Barry Osmond is
up to these days, shall we?

That name might ring a bell with some of you from the indignant letter he wrote to the Guelph Mercury on August 2nd regarding all of the negative sniping by Liberal supporters at Gloria “MIA” Kovach, including “implying she’s just a Stephen Harper sock puppet.” Apparently, Mr. Osmond doesn’t understand the meaning of the word “imply” but whatever.

The next day, Progressive Blogger “Skinny Dipper” speculated that Mr. Osmond might actually be the “Blogging Tory” that posts anonymously as “Christian Conservative” because of the distinct similarity of wording used in the letter to the editor and a blog post by the redeemed one also whinging about the negative attacks on Kovach. That would appear not to be the case, but one never knows for sure about these things.

Be that as it may, Skinny also wondered whether Mr. Osmond was, rather than just an average citizen, perhaps a Conservative partisan based on the strength of his name appearing as the contact on an invitation to 2007 Conservative Party fundraising dinner ostensibly celebrating the birthday of Sir John A. Macdonald featuring Preston Manning as the guest speaker. Perhaps so.

Now, it seems that Mr. Osmond has launched a website called “Stop the Carbon Tax” that another “Blogging Tory,” the pseudo-conservative pundit and Sun Media hack Gerry Nicholls promoted on his blog yesterday this way: “Grassroots opposition to the Liberal Carbon Tax is growing as evidenced by this cool new site” which linked to Osmond’s site. Yeah, right… “evidence” of “grassroots opposition” — from Conservative party operatives masquerading as average citizens. Cool? Try pathetic. 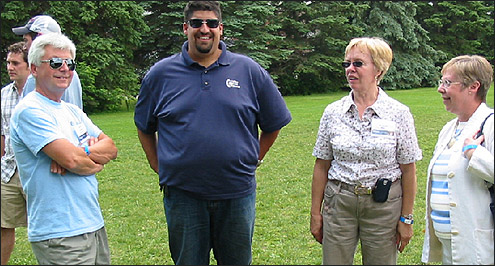 Update: Jeff Davidson has brought the picture above to our attention. “Average citizen” Barry Osmond is part of “Team Kovach” — he’s the one without boobs.

It seems that Orders of Canada are not only being wiped on the soiled backsides of hateful religious extremists these days, they’re also now being returned from beyond the grave by aspiring Catholic saints.

Aside from being rude and disrespectful to all parties concerned, this really seems like the height of arrogant presumption to me.

Reid at “Right from Alberta” is somewhat bothered “that a group of people are using a dead person as a soapbox” — something that’s most certainly never perturbed the residents of this place: