Republican Congressman Paul Broun of Georgia and two evangelical kooks secretly “anoint” the entranceway beneath the Capitol that President-elect Barack Obama will pass through as he walks onto the inaugural stage to take the oath of office.

Max Blumenthal has all the hilariously awful details regarding these three fanatical Jesus freaks.

Maybe Pastor Mark should familiarize himself with Exodus 20:16. Idiot.

Sounds like fun, doesn’t it? In any case, here’s our own home-grown evangelical wingnut “Dr.” Charles McVety expressing some manufactured outrage over the activities of a group attempting to revive the “Summer of Love” experience from the late 60s for the benefit of nostalgic baby-boomers and others who just want to recreate in an openly sexual manner.

But let’s now turn to the matter at hand [insert joke here] which is brought to our attention by “Unrepentant Old Hippie” with respect to “Dr” McVety’s latest phony “outrage” concerning a wonderful mural at Rideau Hall by Norval Morrisseau entitled “Androgyny” which it has been said, “represents the Ojibway shaman’s world view, showing a thriving and bountiful world in which all the diverse elements are in perfect balance.” How entirely… Canadian.

I’ve been a bit out of the loop recently and wasn’t aware that Canada had “officially” been declared “a homosexual country” so the picture from Canadian Press of Harper’s new cabinet posing in front of the aforementioned mural now seems more than a little curious. Would it be fair to presume that perhaps a statement of some kind is being made here? Maybe… just maybe… in a rather discrete way, Harper is signaling that he will be faithful to his election night promise to be more inclusive. And maybe also this is a not entirely unclear message that his new government has little patience for the intolerant views of fringe-dwelling, batshit crazy nutcases like “Dr.” McVety.

Who knows? If that’s actually the case, then kudos to Steven Harper! That’s definitely something worthy of applause and appreciation.

Good on Colby Cosh for mercilessly flaying the wingnutty Canada Family Action Coalition (“Dr.” McVety’s political action committee), in the pages of the National Post this morning for its “ludicrous attack” on Chief Justice Beverly McLachlin.

CFAC’s letter of complaint is a bizarre document even if one overlooks the sheer improbability of having a Chief Justice cashiered over some supposed act of jiggery-pokery involving the Order of Canada. CFAC’s Web site, whereupon the hyperlink to the letter is currently broken, has marshalled “42 organizations” in support of their missive; eccentrically, the “organizations” include several small businesses (Can Am Fabricating and Welding stands strong in favour of life!) and at least one private citizen.

Its arguments, rest assured, are no less weird. The Constitution of the Order states that a member may be terminated if his conduct marks “a significant departure from generally-recognized standards of public behaviour which is seen to undermine the credibility, integrity or relevance of the Order.” According to CFAC, Morgentaler’s years of challenging abortion law are obviously in violation of “the norms of society”: Ergo, the Chief Justice of Canada must be fired. It’s simple logic, people!

We had some mocking the always hilarious media buffoonery of “Dr.” McVety and his not-so-merry band of whackaloons yesterday, but for some more serious enjoyment, be sure to check out the article by Christopher Bird over at The Court which is a blog at Osgoode Hall Law School that bills itself as the definitive “online resource for debate & data about the Supreme Court of Canada.”

In another one of the “defining moments” from last weekend’s Saddleback forum (and yes, I promise this will be the last post on it), Pastor Warren asked each of the candidates “At what point does a baby get human rights, in your view?”

Atrios cutely reframes the question by recalling Democratic Sen. Claire McCaskill’s response to a similar query posed by Tim Russert on Meet The Press some years ago: “What are you asking? When does an embryo become ensouled?” Now that would have been a sharp comeback!

Unfortunately, Obama felt compelled to first point out the difference of opinion that exists depending on whether one was “looking at it from a theological perspective or a scientific perspective” (which led to the “pay grade” remark) and then launched into a rambling, err “thoughtful” discussion about the “moral and ethical dimensions” of the abortion issue.

Personally, I thought his response was just fine, if a little windy, but it was generally panned by the pundits and of course it most certainly didn’t go over well with the mainly evangelical audience. Many right-wing bloggers immediately seized on his remark that bringing specificity to the question of when life begins was “above my pay grade” — presumably because they viewed this as a craven abdication of responsibility, or maybe due to their inability to comprehend the notion that anything could possibly fall outside the ambit of presidential authority.

By contrast, McCain’s terse response to the question was, quite simply: “At the moment of conception.” Well, that’s just fine as a matter of religious dogma I suppose, but as Duncan points out:

Believe what you want, but the important question for politicians is how such things get translated into… policy. And when McCain says he believes life begins at conception (cheer!) it’s pretty meaningless unless he’s asked to explain how that would be translated into policy. Are blastocysts entitled to child support? Do all late periods need to be reported to the Ministry of Health? And, of course, my favorite: Are those who implant multiple embryos during IVF treatments, knowing full well that most will die, guilty of negligent manslaughter?

Most excellent questions and perhaps ones that should be kept in mind for future reference when dealing with our own home-grown fundamentalists and “fetus-fetishists” (you know WHO THEY ARE) in their neverending and utterly tiresome efforts to roll back the clock and have women’s reproductive rights curtailed or rescinded altogether in the name of God®. 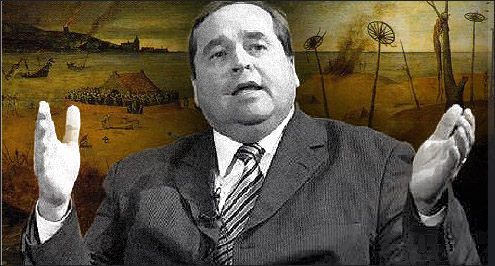 According to a story in the Globe & Mail this morning, it seems that the self-styled “Doctor” Charles McVety, an inveterate fabulist, extreme right-wing political activist and evangelical “Christian Zionist” (or whatever name his creed’s brand of God® goes by these days), is “unimpressed” by the fact that Chief Justice Beverley McLachlin (who is a real PhD., by the way) didn’t actually cast a vote in the controversial appointment of another Dr. (another real doctor) Henry Morgantaler to the Order of Canada.

Ah yes, “Dr.” McVety wants judges on the bench that are “non-political” and “non-ideological”… And if you believe that, well, then I’ve just been elected to my 10th term as President of the Republic of Tajikistan.

Bonus “Doctoral” Idiocy: In a bitchy letter to William Thorsell, the CEO of the Royal Ontario Museum from March 2008, “Dr.” McVety writes, “The exhibit displays the legacy left by Darwin. Does it only display the positive or does it also display the negative? i.e. Hitler, Lennon, Mao, etc.” Who knew that John Lennon was such a monstrous figure of evil incarnate?

Update: Dawg puts the hammer to the Globe & Mail for its appalling coverage of the ridiculous antics of McVety and other “conservative Christian” political activists.

So there we have it: a whole slew of Potemkin village false-front organizations signing a complaint submitted by an evangelist with a fake doctorate. Come on, Globe. Is none of this worth a mention? A Stephen Harper favourite speaking in (forked) tongues? Or — a wicked thought — are the professional scribblers on Front Street not even aware of it?

Sad to say, that may well be the case.