Yeah, “he’s a straight-up guy” alright. One who is currently in the process of weaseling out of his own “fixed election” legislation that he and his MPs were so proudly crowing about not that long ago. A “straight-up guy” who gave Conservative committee chairs a secret handbook detailing ways to disrupt and derail meetings whenever the debate threatens the party’s agenda. A “straight up guy” that’s been implicated in an alleged $1 million bribe made to an independent MP with terminal cancer in an attempt to win his crucial vote and bring down the former government. Well, you can fill in the rest.

Hey, if you’re feeling creative (and a little malicious), why not make up your own lines for these so-called “main street Canadians” to spout? I can post the best ones in an update here and then maybe some tech-savvy progressive blogger can use them to re-mix the ad, replacing the groan-inducing originals with your more comical versions. 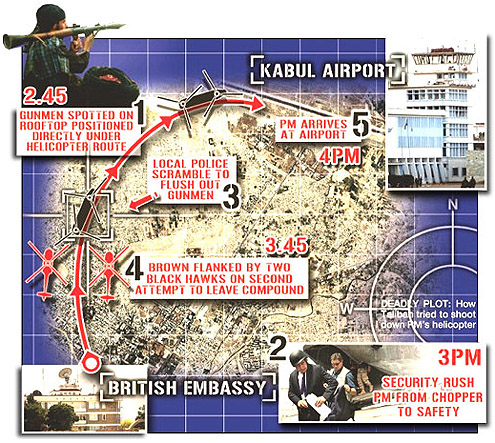 It’s hard not to speculate about what might have happened had the attempted assassination of Gordon Brown by “Taliban fanatics” on his recent stop-over in Afghanistan not been narrowly averted. It would surely have dealt a huge psychological blow to the NATO campaign, but would it have changed anything?

Seriously not worth the effort, so… what he said.

And just for the record, Bob’s always been well regarded here, that’s why he’s on my blogroll. Perhaps if Evans wasn’t a severely retarded dirtbag he might have noticed that instead of relying on his flaccid, impotent, err, faulty memory. 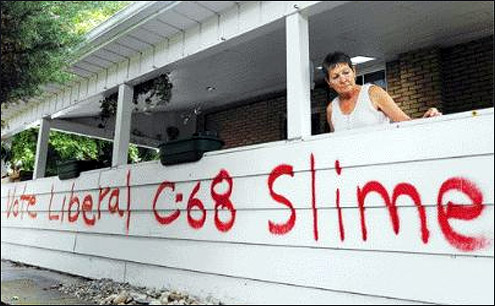 I can’t wait for some feculent “Blogging Tory” to suggest that the anti-Liberal vandalism and sabotaging of vehicles owned by Liberal supporters was the work of agent provocateurs trying to make the Conservative party look bad.

Wanna bet? You know they will.

Update: More on this at Scott’s place and confirmation of the expected allegations here. 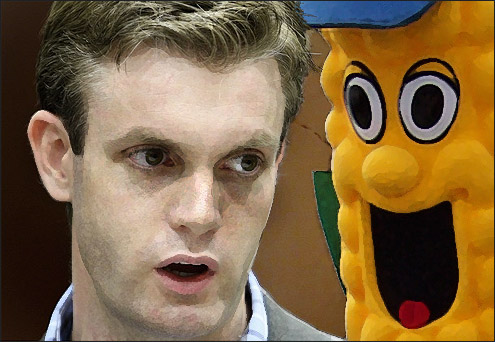 Kory Teneycke, PMO media director, says “this shouldn’t be a huge surprise to anyone” and reiterates Harper’s position of Parliament being at an impasse. He argues there’s a complete lack of common ground with the Opposition and the Liberals developed a (Green Shift) platform over the summer that makes it “very difficult for Dion to compromise with the government because he’s diametrically opposed.”

Well really. I mean how can Stephen Harper possibly be expected to govern effectively with an Official Opposition that’s actually opposed to the Conservative party? Why it’s just simple logic! After all, 36.27% of the electorate gave Harper a “mandate” to rule with absolute, unquestioned authority until he conveniently decides that the other parties don’t have confidence in the Conservatives and is then forced to declare a potentially illegal snap election in order to “crush” them. Yippee!

On the Liberal Party being just like Communist regimes:

”Conservatives should be marked by realism and the knowledge the Liberal party is one of the most successful parties ever – more successful than the Communist parties in Russia and China and more enduring than Fidel Castro.”

Precisely, and it’s entirely appropriate to compare a democratically elected party that’s formed the nation’s government in 23 of Canada’s 38 parliaments with an uninterrupted 73 year-long totalitarian regime dominated by the 29 year rule of one of the most brutal dictators in history, responsible for the criminal slaughter of millions.

“Obviously, we’re in uncertain economic times; all the more reason to have the certainty of a mandate so you can address the economic challenges as they occur.”

Glenn Hubbers, the Green Party candidate for Newmarket-Aurora takes an hilarious trip down memory lane with a number of Conservative luminaries speaking out on issue of fixed election dates. Here, for example, is Peter Van Loan from February of last year:

As I indicated, we have passed Bill C-16 on fixed election dates through the House of Commons. Never again will the government of the day be able to play around with the date of an election for its own crass political motives.

Never again! Well, until now of course, when everything is, you know, different.
As I’ve said before, Harper’s broken promise (presuming he goes ahead and does it) neither bothers nor surprises me in the least, but the flagrant hypocrisy of these sanctimonious phonies is still pretty droll.

Update: The Globe & Mail has a Rogue’s Gallery of sorts on this.

Yay! Sanity to the rescue. Thankfully, the long summer hiatus is finally over.

Catch the rest of the show here.