Robert Sinche, RPS Global head of FX Strategy, on why Canada is able to cut corporate taxes for the fourth year straight…

Watching this brief report gives you a pretty clear idea of how unbelievably simplistic business news coverage is on cable networks like Fox Business and CNBC.

I wonder how many Fox viewers might be a tad confused by this fairly glowing assessment of the Canadian economy after having been incessantly told for years by right-wing pundits on its sister channel that we are a hopeless nation of raving socialists. What a shame that the expert here didn’t mention that it was a “liberal” government that handled the “major restructuring” in the 90s… that would have really blown their minds.

Update: Heh. Seems the story has migrated over to the “News” arm of Fox with a piece featuring New York Congressman Chris Lee (R) warning that the U.S. must follow Canada’s lead in lowering corporate tax rates or face the prospect of businesses migrating north. As if…

Not that I care much for the whole “Pinheads/Patriots” dichotomy Bill O’Reilly employs on his nightly entertainment program, but it is kind of interesting that 67% of the show’s viewers thought that Pat Robertson was a “Patriot” for stating that possession of marijuana should be decriminalized.

Perhaps Robertson’s epiphany will provide encouragement (or moral cover) to others in positions of influence that agree with his comments but have up to now been reluctant for one reason or another to publicly endorse the decriminalization of pot.

I’m not quite sure what to make of this new “grassroots” political movement taking shape south of the border, but as a something of moderate centrist by nature, did find a certain amount of affinity with its non-partisan objectives.

What struck me as amusing, and perhaps an unintentional legitimization of its core premise, was the vicious reaction from both the most vocal left and right poles of spectrum immediately following its launch.

Meanwhile, on the other side of the hyperpartisan battlefield, there was comedian Rush Limbaugh blasting the group as nothing more than a bunch of unemployed liberal hacks reacting to the insurgent mandate of the mid-term elections, as you can see here:

In a later broadcast, Rush went on to dismiss No Labels as “elitist snobs” and furthermore claimed for good measure that the group was “racist” in nature, by virtue of an obscure ruling from a court in South Carolina that determined not having party designations on the ballot would somehow disadvantage black voters…

And so it goes in the land where, as Jim Hightower famously said, “There’s nothing in the middle of the road but a yellow line and dead armadillos.”

As noted the other day on the blog of Joseph Uranowski (aka “The Equivocator”), a couple of contenders for leadership of the so-called “Liberal” Party of British Columbia seem to think it would be a swell idea to lower the voting age in the province to 16.

My initial reaction was to regard this as a tremendously dumb idea, but the foregoing news story changed my mind.

As reported, only one lone individual out of a class of (presumably) 25 students (4% in pollster land) thought this was a good idea. The overwhelming majority of teenagers it seems figured they weren’t “mature” enough or otherwise expressed reservations about their capability to responsibly cast an election ballot.

Perversely, this forthright admission of their insufficiency in terms of being immature, self-absorbed wankers who are terrifically lacking relevant information about current affairs, more than qualifies them in my estimation to join the ranks of the general voting public that, for the most part, abundantly shares their shortcomings in these respects, irrespective of age.

If a casual aside by Nicholas Kristoff in his New York Times column today is to be believed, the U.S. military now has more people in its marching bands than the State Department has in its foreign service.

Granted, the military (or the USAF in any case) likes to pretend that these marching bands are “musical ambassadors” – seriously, that’s part of their motto – but surely there’s something staggeringly out of whack when the troop of soldiers quite literally charged with beating the drums of war outnumbers the diplomatic corps.

p.s. Here’s another interesting factoid: With 200 odd courses in the USA and around the world currently under its control, the U.S. military is arguably the largest golf management outfit in the world, rivaling the holdings of Arizona-based Troon Inc.

A film by Bryan Law and Dan Dicks United We Fall is a documentary about the North American Union that is being developed right now between Canada, the United States, and Mexico.

For years this topic has been debated in the news and in political circles as being a possible future for North America. In recent years, the mood has shifted and a rift is developing between those who want a Deeply Integrated North American Community, and those who wish to retain their national sovereignty. This film takes a look at both sides by interviewing both insiders and activists who have been at the heart of this heated debate. The film also looks to the broader agenda of building a world government and its implications.

I have mixed feelings about this film. While it presents both sides of the argument to some extent, it is clearly weighted towards to the thesis that incrementally deeper integration of the North American economy is merely the first step towards the establishment of a nefarious “New World Order” or domination of all countries under the rule of “one world government” of some kind which is essentially nothing but a front for oligarchic fascism. Once it veers into the territory of Alex Jones and his kooky, conspiracy-minded ilk in this way, the film loses much of its credibility – for me at least.

Perhaps I’m mistaken, but it seems that the fears engendered by those who dread an incipient “New World Order” are predicated on the assumption that its advocates are villainous “evildoers” (for lack of a better word) bent on nothing short of the enslavement of people throughout the world. And yes, this is a word dropped frequently during the film, along with literal expressions of the concept by way of the repeated depictions shown of slaves building the Egyptian pyramids (which we now know to be an inventive falsehood, it should be noted). Not only does this appear to be a ridiculous notion on its face, but also one that has no tenable foundation in economic reality (i.e., historically, slave economies are unsustainable and prone to catastrophic collapse).

Another contention that is fundamentally absurd is the idea voiced by a number of the activists in the film that a “one world government” would somehow beget “one religion”… It is simply inconceivable that such a development could ever take place. People may be willing to gradually surrender political or economic rights to supranational organizations for practical reasons of economic necessity, but it’s highly doubtful that the profoundly irrational tenets of their particular creed’s faith would be relinquished to a homogeneous secular authority without an epic fight to the death.

This, above all, perhaps reveals most clearly the fantastic, completely unrealistic nature of the fears expressed by those agitating against an imagined “New World Order” or some other lurking phantasm of global oppression.

Which isn’t to say, of course, that there doesn’t already exist a vast array of self-serving Corporatist forces busily seeking to consolidate their power and influence over governments around the world, to subvert so-called “democracies” in any way possible through various quasi-legal means of graft and corruption, or to intricately manipulate the exercise of legislation to their profitable advantage… But the idea that there exists a well coordinated conspiracy to achieve their ends on a global basis through the permanent establishment of a NWO is more than a bit far-fetched.

If anything, paranoid extrapolations of this kind serve as detriments, undermining what are otherwise quite legitimate concerns about water and energy rights, the negative implications of issues such as the “Security and Prosperity Partnership” or for that matter, the comprehensive free trade in goods and services with the EU currently being negotiated by the Harper government, amongst other things.

I was so happy that the folks at Countdown decided to include this stellar bit of “performance art” in their grab bag of year-end favourite moments earlier this week. Even after countless viewings, the ferociously impassioned (albeit wildly unhinged) oratory of Republican hopeful Phil Davison vying last September for a minor political office in Ohio still has all the riveting power of an spectacular train wreck.

Apparently, Davison was completely shocked by the reaction to this video taken by a local reporter at the event after it hit the Huffigton Post and then quickly went viral on the Internets. Described by those who know him as a generally “quiet” and “introverted” person, it seems this was his earnest notion of how a rousing political stump speech is meant to be delivered.

Bill Maher delivers a seasonable homily pointing out what is indisputably the “true religion” of America: Greed.

Notwithstanding the above, best wishes to everyone for a very Merry Christmas.

It’s been quite a long while since I posted anything on this blog even though a great deal of events have transpired since then. On a personal level, I’ve pulled up roots for the umpteenth time and moved cross-country, landing this past summer in Winnipeg — a city to which the expression “of all places” undeservedly appends itself perhaps more than it should.

Having deserted this forum so abruptly countless months ago without any explanation, it’s hard to know how best to return and start things up again.

Eschewing blithering, heartfelt apologies and lengthy excuses for being hopelessly MIA, maybe its best to simply plunge directly back into the flow of events… 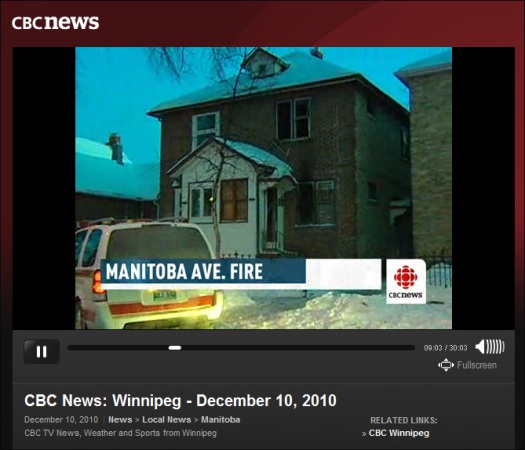 So here’s a screengrab from the local CBC newscast of the house next door to mine catching fire the other night. My place is the brick building on the right.