Meanwhile, on planet Earth, here’s Stéphane Dion in the HOC today (in colour!):

p.s. Where the hell was that guy last year? 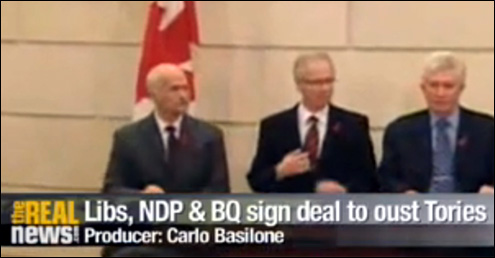 “Yesterday, as part of the culmination of the machinations of the leader of the NDP, we had these three parties together, forming this agreement, signing a document and they wouldn’t even have the Canadian flag behind them.” — Stephen Harper

Yes, I know… it’s absolutely shocking isn’t it that our current prime minister would blatantly LIE through his teeth in such an obvious way just for the sake of shamelessly pandering to the most ignorant, uninformed slackwits and moronic rubes amongst us who still regard his potty droppings as immaculate gemstones in the rough? Who could possibly have foreseen such purposefully disingenuous fibbing coming from the Dear Leader?

I think you know how the rest of that goes. Click on the above graphic if you need directions, a map to where you can lock-step with fellow brown-shirts, and instructions on how to “twitter” yourselves into an indignant frenzy of pointless, frothing outrage.

Oh, and don’t forget to take lots of pics!

Update: Urgh. Dueling rallies. Spare me the grief and bother. 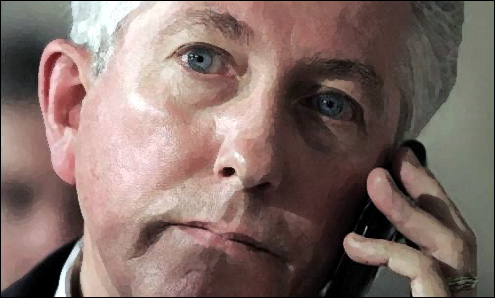 Since the idea of a coalition to defeat the Harper government began to seriously take shape last week, by far the loudest and most frequently heard complaint from the usual suspects has been the participation of the Bloc Québécois.

Adding what some might regard as legitimate weight to that objection, it’s reported in the Vancouver Sun this morning that Ted McWhinney, former Liberal MP (John Turner’s successor in Vancouver-Quadra), political scientist, esteemed constitutional lawyer, and sometimes advisor to past Governors General and other notables, apparently thinks that a coalition dependent on the support of the BQ would be “crazy” (to use the good professor’s highly technical legal phraseology).

According to McWhinney (for what it’s worth, an Aussie who believes that once QEII passes on, Canada should simply allow the monarchy to quietly fade away) seems to object to Duceppe effectively being “kingmaker” in the proposed coalition arrangement. “What is the Bloc leader going to demand for his support?” he asks, rather aimlessly. Well, what he always does, I would imagine; specifically, more and better deals for the citizens of Quebec in addition to overarching demands regarding the environment and other issues on which “progressives” (and surveys would have us believe, most Canadians) are in general agreement with.

Actually, there’s not a lot of substance to McWhinney’s speculative objections. Also, you might notice that they already seem to have been outpaced by events. “Unless she is satisfied that there’s a definite prospect of a continuing government, she doesn’t have to go along,” he notes. Indeed. But the accord signed yesterday would seem to resolve uncertainty about that. If anything, the prospect of a continuing government under the opposition’s coalition arrangement is quite literally more “definite” than was the case under the endless brinksmanship of Stephen Harper’s recklessly partisan minority.

At the risk of committing the sin of “shooting the messenger” it might be legitimate to point out that the journalist in this instance has been a rather implacable and strident foe of the Bloc. In past articles Yaffee has called the BQ “an unhealthy blight in the federal Parliament” and has railed indignantly against public subsidies that fund its existence. In this respect, she’s not alone. Many people share that sentiment, even though a good number of others who operate in the reality-based universe have long since moved on from it.