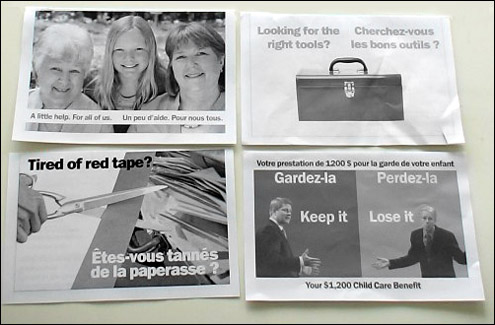 So what, am I like chopped liver over here? I seem to be the only person in this great land that isn’t being inundated with these stupid things. I keep hearing complaints (here, here, here, here, and of course here) these days, but I’ve yet to get one from the Conservatives. Maybe they’re happy to let the NDP do their dirty work for them in this riding, because I do get an awful lot of mail from Jack Layton for some mysterious reason.

Interesting note on the “strategy” behind these taxpayer subsidized handbills from a post Stephen Taylor made on the subject back in May:

Conservatives need to do as they are doing elsewhere in the country; an effective Conservative campaign will not so much win on converting ardent Liberal partisans but rather by demoralizing them and have them ponder why they should get and and [sic] vote for a so-called leader that will not stand in the House of Commons and vote for them.

By the way, I find it absolutely hilarious that in one of their silly mailings, these buffoons would refer to themselves as “the right tools.” Quite so.

PSA has some fiendish ideas for getting back at the Conservatives, or you can take a somewhat more demure approach like this kid in Parry Sound.

What could be funnier than the eye-rolling absurdity of a highly privileged snot like Mary Martha Corinne Morrison Claiborne Boggs (aka “Cokie” Roberts) telling the rubes that Barack Obama is acting like an elitist snob for taking a vacation in Hawaii instead of some place in South Carolina where the common folk go, presumably.

“Going off this week to a vacation in Hawaii does not make any sense whatsoever. I know his grandmother lives in Hawaii and I know Hawaii is a state but it has the look of him going off to some foreign, exotic place. He should be in Myrtle Beach, you know, if he’s going to take a vacation at this time.”

Hey, perhaps Obama wouldn’t need to take a vacation at all if, like John McCain, he took every weekend off to spend time with family, friends advisers, and sometimes even members of the “liberal” press corps at residences in Arlington, Va., and Phoenix or vacation homes near Sedona, Ariz., and San Diego. Funny that the blissfully clueless Cokie doesn’t seem in the least bit concerned about the “look” of that.

Not that there are likely too many competitors for that title…

In any case, you just missed it. Running August 7-10, on a route stretching for 654 miles from West Unity, Ohio to Gadsden, Alabama, along US Highway 127 and the Lookout Mountain Parkway, participant vendors either set up in a front yard along the route, or cluster in vacant lots and fields.

Funny that Frank DeCaro (of all people) drove all the way down from New York to cruise for flea market treasures and assorted “junque” (oh, and pork rinds).

“Let’s just drop a big bomb on it,” says “Culture of Life” blogger.

After titillating the lurid prurience of her readers with the latest breathless story ripped from today’s “Dhimmi Watch” (a daily must-read for all Muslim-haters) concerning “a 3-year-old girl… kidnapped and raped by unidentified men” in Afghanistan, right-wing clown, relapsed Catholic and professional “free speech” martyr Kathie Shaidle, rhetorically asks :

“What’s the worst case scenario outcome of pulling our troops and just nuking the joint?”

If Japan is any indication, at most we’d have to cope with some goofy monster movies twenty years from now, made by an instantly smartened-up ally who’d abandoned their death cult religion.

Alas, since Afghani IQs are markedly lower than Japanese ones, we won’t have any cool but useless gadgets, toys and cartoons to look forward to.

I wonder if it ever occurs to vicious Antoinettes of the Right like Shaidle that their credibility when speaking about the plight of “unprotected” women and girls in Afghanistan drops to precisely zero when they turn on a dime and start joking about killing millions of them with death from above.

h/t: Lulu (and for the borrowed screengrab).

Liberal author Thomas Frank appeared on The Colbert Report last week, promoting his new book The Wrecking Crew: How Conservatives Rule, succinctly explaining the general thesis of his latest work this way: Conservatives may be good at winning elections, but they suck when it comes to governing.

Expanding more seriously on this concept, here’s Frank at last year’s sold-out “Failure of Conservatism Conference” held in Washington, D.C., talking about how the laissez-faire system is destroying America. This builds upon some of the ideas previously explored in What’s the Matter With Kansas?, his extremely insightful book about conservative populism that pondered why so many Americans have, in recent history at least, consistently voted against their own economic self-interest.

In case you don’t feel like watching the whole thing, I’ve transcribed some of the key parts regarding a fundamental and highly ironic contradiction inherent within the modern, so-called “conservative” movement that occurred to Frank after spending weeks poring over huge stacks of old copies of Reader’s Digest while researching his new book:

As I’m reading these, I often get to thinking, whatever happened to that nice, middle-class world the Digest claimed to speak for, back in the day? Whatever happened to those honest and prosperous blue-collar toilers who were always so sick of the dirty hippies and would stand tall for their flag and their country? And the answer is, that the system that they voted for, that they put into office, has effectively destroyed them. They don’t exist anymore. The economic conditions that made them possible have been erased by the conservative revolution. That old Reader’s Digest America that made Ronald Reagan possible was killed off by Ronald Reagan and by his heirs.

Now, when I was growing up back in the 60s and 70s, you all remember this, yet sometimes I have to remind myself that people actually used to talk this way, but the great sociological cliché of American life was that we lived in a “mass middle-class society” where the differences between white-collar and blue-collar were differences of style and taste, not differences of income… There’s a guy called Paul Fussell, wrote a whole book about it [“Class, A Guide Through the American Status System”] — it’s very amusing and vicious and cruel. Anyway, that’s who we were as Americans, right? We were the land of the “great middle” and all the kids were rebelling against stifling conformity and we were all supposed to be growing absurd because our abundance didn’t feed our soul and that sort of thing. But it’s all moot today.

Today, the great sociological cliché, that everyone on the planet — and I’m not joking about this, because everyone on the planet can recite this cliché — is not America as the land of shared affluence, but America as the place that tolerates and accepts great extremes of wealth and poverty. This is supposed to be, you know, so deep in our DNA, the very story of our nation. And everyone in Europe knows this from infinite repetition: America is the example to follow, because Americans don’t get upset when the boss makes 400 times as much as the blue-collar worker, and it’s our easy-going tolerance of extreme inequality that makes Americans what we are. That’s what makes us unique among the peoples of the world and so miraculously profitable a place to invest in.

So what I’m getting at, what I want you to remember and take home from this conference, is a fundamental contradiction in conservatism that they can’t overcome, no matter what they do, that this is a movement that is driven in some ways by nostalgia, right? By these gauzy memories of this small-town, Reader’s Digest ideal, where everyone has a nice home and a picket fence. But that world… was the product of liberalism, and the conservatives themselves have killed that world out of their dedication to their real God: the laissez-faire ideal.

Given the heinous clusterfuck of the past seven years in America that’s resulted in financial chaos, widespread deindustrialization, Gilded Age inequality, the worst corporate wilding since the robber barons, and the most massive indebtedness in the annals of time, not to mention examples of catastrophic incompetence resulting in signature follies like Iraq, Enron and Katrina, etc., it makes you wonder just how much further mugging by reality, to paraphrase the expression Irving Kristol once applied to liberals, it will take some people to realize that modern so-called “conservatism” has been a dismal failure.

Over the last week, McCain aides were distributing free tire pressure gauges to the press corps (and to donors who send in $25) claiming, as campaign manager Rick Davis did in an e-mail to supporters, that “Senator Obama’s solution to high gas prices is telling Americans to make sure their tires are inflated.”

Well of course, that’s not Obama’s “solution” at all and this pathetic gambit just lends more weight to the argument that the McCain is running a juvenile campaign of abysmal “stupidification.” How far has the intelligence level of so-called “conservatives” fallen over the years? Behold:

The Bush administration yesterday launched an advertising blitz telling Americans they could fight oil shortages and high gas prices by conserving, while advising Congress there is no sign of price gouging by the oil industry and that gas prices are “not unreasonable.”

The slogan for the yearlong campaign, “Do Your Part, Drive Smart,” tells consumers they can save more than 7 million gallons of gasoline a day if they keep their tires properly inflated, drive slower and join car pools.

“The president has called upon Americans to do their part ‘to conserve,’ “ Energy Secretary James D. Watkins said in Boston yesterday afternoon. “Our intention is to give people simple steps they can take immediately and have direct impact on fuel savings.”
— “Ad blitz launched to fight oil shortage,” The Washington Times, September 14, 1990

One television ad, which will be broadcast later this year, shows a gigantic oil gusher that is not coming from a well, but bursting forth from the valve on a tire. The announcer tells viewers that by slightly increasing the air pressure slightly in their tires, they can save 50,000 barrels of oil each day.

Like past conservation campaigns, the new one tries to get motorists to drive more slowly. A print ad pictures a gasoline pedal and tells motorists that when they step on the gas they should use their heads because if American drivers reduced their normal highway cruising speed by just five miles an hour, it would save two million barrels of oil a day.
— “Crisis Spurs Campaign To Save Oil,” The New York Times, September 14, 1990

While driving around on Friday (in our gas-guzzling 83 Chevy Malibu, I might add), I was listening to Rush Limbaugh’s show and, unbelievably, he was still blowing hard on this silliness:

The Obama camp continues to push the tire gauge. I mean, this is incredible. They continue to push this tire gauge thing as an energy plan. They claim to have found proof somewhere that properly inflating your tires, if we all did it, would save something like 50,000 gallons or barrels a day or some such thing. It’s just absurd.

Indeed. And where did Obama’s campaign get that absurd “proof” anyway? Oh yes, the government of George Bush, Sr., back in the days when “conservatives” were telling people to “Do Your Part, Drive Smart.”