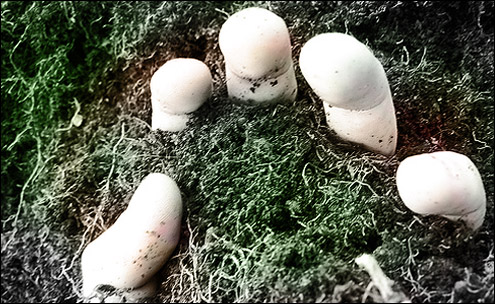 And no, we’re not talking about the Bush administration…

Gosh, I can’t imagine why those nefarious moonbats at the Canadian Press would even dare suggest that the Harper government would have tried to play down the release of a major report warning about serious health effects from climate change. I mean, what’s to hide?

Even though it is not possible to predict the occurrence of individual extreme weather events before the conditions that spawn them form, climate change scenarios project an increased risk of extreme weather and other climate related events (with the exception of extreme cold) for all regions of Canada. More floods are projected to occur in Canadian communities due to an increase in intense precipitation events, while the risk of drought and forest fires is also projected to increase. Many coastal areas will face greater risks from extreme weather events, such as stronger storm surges, and a decrease in the winter sea ice which protects coastlines. Heat waves are very likely to increase in frequency and severity, with the risk of heat related deaths being the greatest in cities due to higher population densities and the urban heat island effect. In addition to increased risks from events that have affected some regions in the past, climate change may also pose threats from climate-related hazards that have not been experienced in a region previously, or have never occurred on a scale that has seriously disrupted a community or impacted human health. Historical experience with natural hazards is often related to levels of preparedness. Therefore, the introduction of new, or more severe hazards into some Canadian communities is a cause for concern about potential impacts on health.

In light of the suicide today of US Army scientist Bruce E. Ivins, the eccentric kook about to be charged with initiating the anthrax-spore mailings targeting liberal politicians and members of the media such as Tom Brokaw, that killed five people and sickened 17 others, let’s take a little stroll down memory lane and see what Johnny Mac had to say at the time, shall we:

Letterman: How are things going in Afghanistan now?

McCain: I think we’re doing fine …. I think we’ll do fine. The second phase — if I could just make one, very quickly — the second phase is Iraq. There is some indication, and I don’t have the conclusions, but some of this anthrax may – and I emphasize may – have come from Iraq.

Letterman: Oh is that right?

McCain: If that should be the case, that’s when some tough decisions are gonna have to be made.

It was really the anthrax letters — with the first one sent on September 18, just one week after 9/11 — that severely ratcheted up the fear levels and created the climate that would dominate in this country for the next several years after. It was anthrax — sent directly into the heart of the country’s elite political and media institutions, to then-Senate Majority Leader Tom Daschle (D-SD), Sen. Pat Leahy (D-Vt), NBC News anchor Tom Brokaw, and other leading media outlets — that created the impression that social order itself was genuinely threatened by Islamic radicalism.

So what the hell good was all of John McCain’s vaunted “experience” and purportedly superior “judgment” about matters of war and foreign policy given that he not only boldly predicted complete victory in Afghanistan back in 2001 with no apparent regard for the “generational conflict” and multi-billion dollar “nation-building” exercise to come, but also glibly cast Iraq as being the “second phase” of that effort and recklessly made premature speculations that helped contribute to the Bush administration’s fear-mongering surrounding the anthrax scare that formed part of the groundwork for the subsequent invasion? 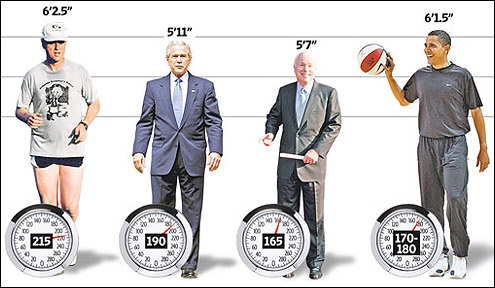 At a town hall meeting in Iowa yesterday, Barack Obama addressed the new attack ad from John McCain that accuses Obama of being little more than a vacuous, paparazzi-pursued, media-created celebrity a la Paris Hilton and Britney Spears. “Given the seriousness of the issues, you’d think we could have a serious debate,” Obama said. “But so far, all we’ve been hearing about is Paris Hilton and Britney Spears. I mean, I do have to ask my opponent, is that the best you can come up with? Is that really what this election is about? Is that what is worthy of the American people?“

Perhaps the same question could be directed to Amy Chozick at The Wall Street Journal who stooped to the level of complete idiocy this morning by asking whether Obama is “Too Fit to Be President?” Seriously.

…in a nation in which 66% of the voting-age population is overweight and 32% is obese, could Sen. Obama’s skinniness be a liability? Despite his visits to waffle houses, ice-cream parlors and greasy-spoon diners around the country, his slim physique just might have some Americans wondering whether he is truly like them.

The candidate has been criticized by opponents for appearing elitist or out of touch with average Americans. A Wall Street Journal/NBC News poll conducted in July shows Sen. Obama still lags behind Republican John McCain among white men and suburban women who say they can’t relate to his background or perceived values.

“He’s too new … and he needs to put some meat on his bones,” says Diana Koenig, 42, a housewife in Corpus Christi, Texas, who says she voted for Sen. Hillary Clinton in the Democratic primary.

“I won’t vote for any beanpole guy,” another Clinton supporter wrote last week on a Yahoo politics message board.

Many people would probably concur with the 19th century philosopher John Stuart Mill when he said that the democratic premise rests on the presence of an educated citizenry, and would support his contention that ideas and policies can neither be examined nor tested in the marketplace in the absence of an informed and critical public.

But consider that an astonishing 20% of adult Americans believe that the Sun revolves around the Earth, 31% believe in astrology, 45% believe that humans have existed on the planet for less than 10,000 years, and 90% can’t find Afghanistan on a map of the world. More to the point, half of Americans can name four characters from The Simpsons, but less than a quarter can name more than one of the guaranteed rights in the First Amendment, only two out of five voters can name all three branches of the federal government, and only one in five know that there are 100 federal senators.

So, perhaps the perniciously childish “tomfoolery” (to quote former top McCain aide John Weaver) typified by the reprehensible “Celeb” ad (that the Arizona senator even had the astounding temerity to say he was “proud” of when responding to a somewhat perplexed supporter yesterday — see below) is really just the sort of thing that’s “worthy of the American people” after all.

Unlike progressives with their almost mystical faith in the wisdom of the common man, conservatives have always much better appreciated Menken’s axiom that “No one in this world has ever lost money by underestimating the intelligence of the great masses of the plain people.” Or elections…

Update: I just knew the follow-ups to this were going to provide much hilarity. World O’Crap doesn’t disappoint:

At the Wall Street Journal, the strain is becoming unbearable. Neck muscles corded, eyes popping, skin glazed with sweat, the WSJ.com writhes in its bed like Linda Blair in The Exorcist, fighting the urge to bolt upright and scream, “Can’t you see that man is a NIG—!” But the only relief they’re offered is a cool washcloth, and a few spoonfuls of Campbell’s Chunky Chicken and Euphemism soup…

Obama doesn’t resemble the typical voter, and that makes regular Americans fear he may not share our traditional values of belly and booty. Where’s his caboose? Where’s the fleshy cow-catcher cantilevered over his belt? Where’s the atherosclerotic plaque caking his arteries like stucco texture-coating on a suburban rambler?

Oh, and the Even-Worsening… That Yahoo! Message board comment cited in the article? Turns out the discussion thread was launched by… none other than Amy Chozick. Go figure.