Desperate to “cause trouble” and create the impression of wild chaos at the DNC, Fox News nerd Griff Jenkins decided to throw himself into a swarm of marching anti-war protesters yesterday afternoon, only to be greeted with hostile shouts of “Fuck FOX News!” and a torrent of abuse from the “out of control” group of “leftist” demonstrators.

According to the Denver Post the “Recreate 68” group, that organizers had projected would rally tens of thousands of people, turned out to be less than 1,200 and were described by the paper as being “so well-behaved much of the time that they waited to cross streets with the green lights.”

Under the bus you go! Mr. Harper’s got an election to win. 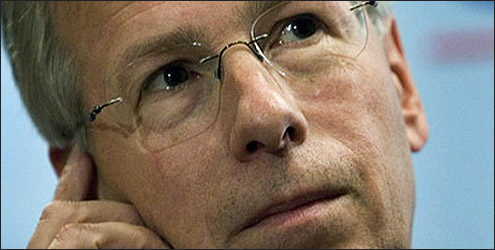 A Harris/Decima poll back at the beginning of May showed that most Canadians thought Stéphane Dion was “weak, uninspiring and unintelligible.” Not exactly a winning combination of attributes for a man aspiring to become the next leader of the country. The bright side, if one can call it that, for Liberals in any case, was that for all of those apparent flaws, people generally found him more “likable” than Stephen Harper. Forty-seven per cent said there was something or other about Dion they didn’t like, compared to 55 per cent who said the same thing about Harper.

That generally lukewarm assessment came to mind when reading Michael Coren’s somewhat conflicted opinion of Dion in this morning’s National Post based on a recent appearance the Liberal leader made on his TV program. By way of damning him with faint praise, Dion is “a profoundly decent man who is a perhaps the most honest leader of his party in living memory,” according to Coren. At the same time however, Dion lacks the required “steel and guile” to be PM. He’s “naïve” and “vulnerable to critique” Coren says — callowness, in his opinion, that he claims is the “product of inexperience.” Apparently, it’s simply beyond belief to someone a profoundly cynical as Coren that a politician might actually be ingenuous rather than, as he seems not only to expect, but to want: a steely, tough-talking, obfuscating liar.

Speaking of which, I wonder when Mr. Harper will be appearing on the program. Perhaps if he does, then we can find more out about his God. Presumably, it’s one that conforms more closely to Coren’s template “of strength, love, judgment and mercy who is the eternal alpha and the omega” rather than the “postmodern godhead of secular niceness” that Dion conjured up in a hapless attempt to make his message more appealing, or perhaps just more comprehensible to the faithful viewers of Coren’s show. 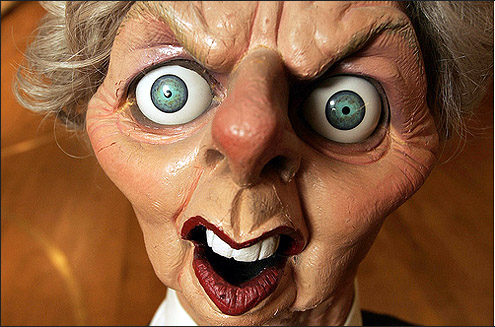 Yesterday, Bill Kristol suggested that, in view of Obama’s “conventional pick of Biden,” the timing could be propitious for McCain to make “a bold choice” by selecting as his running mate “the person he would really like to have by his side in the White House” — Sen. Joe Lieberman!

As TBogg at Firedoglake says: “I would like to take this opportunity to suggest that Republicans take Bill’s advice very very seriously. Please. Sure he’s been wrong before, in fact he’s never been right about anything, but you know what they say about a blind squirrel. And a stopped clock. Heed the call. McCain/Lieberman 08.”

Another variation on a now familiar theme, this time related to the recent spate of arts funding cuts:

Hat tip to Scott Wicks in the comments to an amusing article in the Globe & Mail this morning about a serendipitous meeting between Laureen Harper in Cow Head, Nfld., that gave a small theatre company the chance to lobby against Ottawa’s unceremonious axing of the PromArt program.