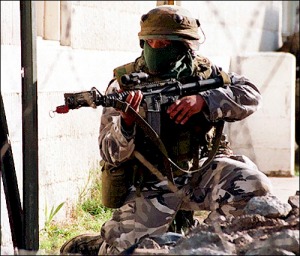 This story has been stuck in my head for some time now and I just can’t figure out the logic behind it. Why on earth is our Defence Department creating camouflage designs based on the “unique requirements” of the urban settings of Vancouver, Montreal and Toronto?

As Eric Graves, the editor of Soldier Systems Daily, a U.S. website that reports on the uniform and equipment industry, says: “It makes zero sense for the Canadian military to produce an urban pattern based on their own cities unless they plan on fighting there.”

Maybe I’m missing something here… Perhaps our Conservative friends can illuminate what’s behind the new “Canadian Urban Environment Pattern” for the military because the point is completely lost on me.

Now, I ask you: Who couldn’t warm up to a face like that? Not to mention the fact that it’s coupled with the fluttering inanities and bitchy “mean girl” cant of Jane Antoinette Taber…

Update: Scott Feschuk asks whether Jane Taber’s description of Tom Flanagan as “super Tory strategist” means “I’m sorry I had to take a whole day off from saying nice things about Laureen Harper or directly quoting Conservative talking points, so I’m doing this instead…”

Wonderful images of our local galaxy courtesy of NASA’s Chandra X-ray Observatory at the Smithsonian’s Astrophysical Observatory in Cambridge, MA. The Chandra Observatory is a telescope linked to an orbiting space satellite that’s specially designed to detect X-ray emissions from very “hot” regions of the Universe such as exploded stars, clusters of galaxies, and matter existing around black holes.

It’s hard not to be awestruck by these glimpses of the centre of the Galaxy in which our solar system exists, especially considering that the Milky Way is but one of innumerable galaxies in the observable universe. And yet, some people are still completely amazed by the tale of a “burning bush” on Mount Horeb.

Gotta love the juxtaposition of stories here… First comes “staggering new numbers” showing that 25% of homeowners in America are “underwater” (i.e., their property is worth less than their mortgage), followed by dire predictions of continuing woe for the housing market, then a story about the millions of “boomerang” kids moving back with their parents (one in seven or 20 million between the ages of 18-34, apparently) to weather the recession… and then Fox News is “on the Job Hunt” — and whattaya know, recruitment for the military is surging. Ah yes, the Army, “where a taste for adventure can land you job security, great benefits and even money for college.”

Kind of sad really when a profession that might very well get your head blown off in combat in some dismal hell-hole on the far side of the planet or render you painfully crippled for life (as is the case with tens of thousands of volunteer recruits over the last decade) is now offered up as an enticing career prospect. Gone, I suppose, are the days when the Duke of Wellington quite aptly described his army as being comprised of “the very scum of the earth.”

Entirely Fabricated Bullshit… but still, quite funny and a nicely executed parody of the old Sinatra classic.

Hey, you have to give props to “conservatives” when they register something even remotely comical given it’s so deeply averse to their nature.