Via Progressive Puppy: “A ten-year-old Arkansas boy named Will Phillips has taken a stand for gay rights by refusing to take the Pledge of Allegiance at his local elementary school. He figures that since ‘liberty and justice for all’ doesn’t apply to LGBT folks, he’s not going to recite something that he knows is a lie.”

Will told the Arkansas Times that he hoped to be a lawyer one day and when the newspaper asked him what it means to be American, he replied: “Freedom of speech. The freedom to disagree. That’s what I think pretty much being an American represents.” Indeed.

I’d like to see this kid in a death-cage, um, debating match with that insufferable conservative wunderkind Jonathan Krohn (although he’s got a few years on the even younger Will so it might not be an entirely fair match-up…).

But seriously, it’s encouraging to see kids of this young age alive to the issues around them… And not only being aware, but then actually speaking, writing and acting on their beliefs. It takes a lot of courage, especially at that age, to stick one’s head up over the parapet of dull conformity, regardless of what your political inclinations may happen to be, and take a principled stand for the civil rights of others. 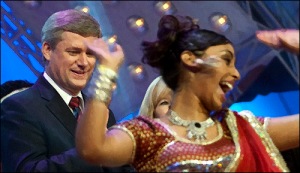 Smart move. Perhaps soon we’ll be seeing Harper on So You Think You Can Dance Canada™ or Little Mosque on the Prairie…

Republican Congressman Mark Kirk contends that if Gitmo detainees are moved to a maximum security facility in rural Illinois, it will become “ground zero for Jihadist terrorist plots” and other nefarious activities. Moreover, it could result in up to 2,000 al Qaeda members visiting Illinois! Gawd, what a moronic tool.

As it moves to close Guantanamo and develop policies for handling terrorism suspects going forward, the government should rely upon our established, traditional system of justice. This includes our system of federal prisons, which have repeatedly proven they can safely hold persons convicted of terrorism offenses.

We are confident that the government can preserve national security without resorting to sweeping and radical departures from an American constitutional tradition that has served us effectively for over two centuries.

Civilian federal courts are the proper forum for terrorism cases. Civilian prisons are the safe, cost effective and appropriate venue to hold persons convicted in federal courts. Over the last two decades, federal courts constituted under Article III of the U.S. Constitution have proven capable of trying a wide array of terrorism cases, without sacrificing either national security or fair trial standards.

Likewise the federal prison system has proven itself fully capable of safely holding literally hundreds of convicted terrorists with no threat or danger to the surrounding community.

Because other languages are just too hard…

Another good one by Mark Fiore.

Notable only for the fact that it doesn’t happen very often.