Author and “Nerdfighter” John Green discusses what the sad story of the Heene family says about the lame yet almost universal yearning for fame and attention.

(John is badly in need of a haircut, by the way… He’s in serious danger of looking like a Troll doll)

Meanwhile, over at Fox News, they’re having frantic conniptions about the local county Sheriff having “lied” to the media. Shock!

Too bad they weren’t similarly outraged when the Bush administration lied the country into a pointless, trillion dollar war in Iraq… Well, it’s all a matter of perspective, I guess.

After the Hollywood gossip Web site TMZ.com reported that the Heenes had been “pitching a reality show about the wacky family,” one of the networks mentioned — TLC, which produces the show “Jon and Kate plus 8” — told CNN that “they approached us months ago, and we passed.”

Gays and Evangelicals face off at the Fort Worth, Texas stockyards.

Priceless quote from gay cowboy Matt Pope: “There’s no need for overdoing it. You shouldn’t have to force it down somebody’s throat.” Indeed.

First of all… who knew? Not sure if it will provide much of an advance over the deliberations of the venerable Law Lords, but I suppose there’s something to be said for the separation of legislative and judicial functions.

Now, maybe it’s only me wondering this, but what the heck is behind that blue curtain, do you think? John Gill, perhaps… 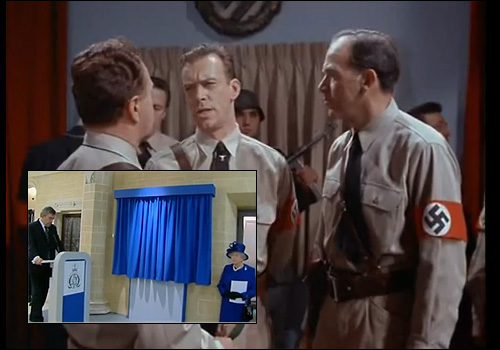