You Have Used Me as a Fish Long Enough

In this episode, the 20th century history of brainwashing and mind control is examined. The film looks at the way in which psychiatry pursued tabula rasa theories of the human mind — initially in order to set people free from traumatic memories and correct madness, then later as a potential instrument of manipulative social control.

The controversial experiments of Donald Ewen Cameron at McGill University from 1957-64 figure prominently, with particular reference to Cold War theories of Communist brainwashing and the search for so-called “hypnoprogammed” assassins (the proverbial “Manchurian Candidate”).

The title of this episode comes from the account of a paranoid schizophrenic who believed her neighbours were using her as a source of amusement by denying her any privacy, like a pet goldfish.

Just attaching a little aftersnark of my own to CC’s observations about the pitiful efforts of anonymous Bloggin’ Tory “JR” in pimping a book (more about that below) from evolution denier and self-confessed “crank” David Berlinski.

Not only does “JR” appear to be unfamiliar with the nature of atheism (that he vigorously decries), but also the sort of logical fallacy that he purports not to be employing against some of its leading advocates:

No ad hominem attacks here, just a few teaser quotes with the author’s biting ‘conclusions’. I recommend you read the book to get his full argument.

Anyone who has read these authors couldn’t help but notice the strident, intolerant, arrogant posture the so-called New Atheists have adopted against religious belief and believers.

That’s aside from calling them “bellicose” proselytizers, of course.

Now, regarding the book, it’s somewhat curious why “JR” would be touting a volume that’s currently out of print, sells for $122 (or more) on E-Bay, and hasn’t yet been released in paperback (although you can pre-order for the low, low price of $10.85 and be eligible for FREE Super Saver Shipping — gift wrap is also available, if/when it ever gets re-published).

Oh, and another thing…

Hitchens’s title says it all. Dawkins’ contempt is similarly blatant. And they all rely on arguments based one way or another on modern, and in quantum-physical string theory and cosmology, postmodern ‘science’.

They “all rely on arguments based one way or another on modern…” On modern what? There seems to be a word of some significance missing there. (Ha! Who says you can’t prove a negative?) I also love that “science” is placed in quotation marks. What’s up with that?

Or not. The sad fact for these disgruntled folks is that there’s only so much room on the turnip wagon to Crazy Town and Sarah Palin has taken up most of it this weekend; meanwhile leaving them aimlessly milling about the civic squares and city parks of fly-over country, their feeble protests and pointless horn-honking largely ignored even by the opportunistic boosters at Fox News. 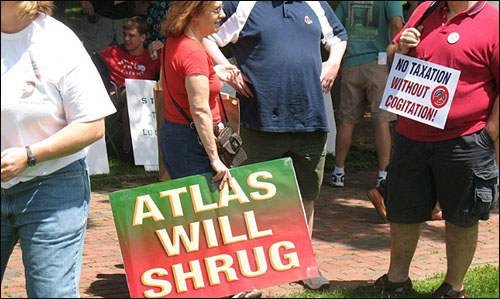