Note: For reasons unknown, the video has been “removed by the user” since this was posted.

You know, some days you’ve just got to be amazed at the galling douchebaggery of Conservatives. Witness this latest attack video from ToryBoy1 (not to be confused with ToryBoy69):

Freeze-frame at 20 seconds in and you get this: 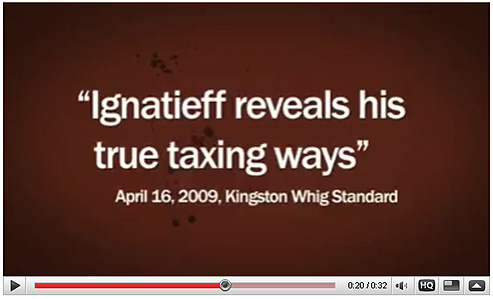 Actually the screen-cap for the video, funnily enough.

Now, you might at first glance think this was ripped from a news story, or at the very least an editorial, by the Kingston Whig Standard, right? Wrong. In fact, it turns out to be nothing more than a Letter to the Editor from a Mr. Glen Parker, a legionnaire who resides in Gananoque, Ontario (apparently).

Mr. Parker is a rather frequent letter writer, having mailed off other epistles to the local Kingston paper, as well as the Toronto Star telling people to quit whining and asking their government for assistance when they get in legal trouble overseas and warning of the dangers that might befall the country if the “looney left” (his quotes) “gets its hands on the purse-strings” of the nation.