Markos Moulitsas (Daily Kos) & Jane Hamsher (Firedog Lake) on CNN’s new Preston on Politics show discussing the future of political blogging in the era of Obama. I’m not sure if I agree with characterization of right-wing blogs or those who read them as there are certainly some highly successful and popular ones stateside that would seem to refute their assertions (LGF, Powerline, Red State, and Townhall, to name just a few).

Trust the Bloggin’ Tories’ dopiest stenographer to blindly peddle a meme that’s currently bouncing around the right-wing echo-chamber. It is, of course, a complete fabrication in every sense of the word and particular of its premise.

The imaginary “Letter from the Boss” purports to advise employs that, because of the election of Barack Obama “our taxes and government fees will now increase in a BIG way.” Accordingly, “the Boss” decides that, in view of the “unfortunate economic reality” of being unable to pass along the additional overhead to customers, he must reduce staff instead. But who should be axed?

After giving it considerable thought, this is what I did: I strolled through our parking lot and found 11 Obama bumper stickers on our employees’ cars and have decided these folks will be the first to be laid off. I can’t think of a more fair way to approach this problem. They wanted change; I gave it to them. If you have a better idea, let me know.

Retribution for having supported Obama — isn’t that sweet?

Never mind that Obama’s budget will restore the top two marginal income tax rates to their 1990s levels of 36% and 39.6% for individuals earning more than $200,000 and couples earning more than $250,000 — changes that will affect only the top 3% of taxpayers (the same group that enjoyed the largest gains in income and wealth over the last decade). In addition, for these taxpayers the tax rate on capital gains will increase to 20%, the lowest rate in the 1990s and the rate President Bush proposed in 2001, and the tax rate on dividends will increase to 20%, a rate lower than the rate of the 1990s and nearly 40% lower than that proposed by President Bush in 2001.

The drum beat of fear, anxiety and impatience rolls on…

Stephen Colbert’s hilarious parody of Glenn Beck’s apocalyptic “War Room” segment where the former CNN host attempts to frighten the crap out of Fox News viewers based on various hypothetical doomsday scenarios that presumably will result from policies of the new Obama administration.

Today, Bloggin’ Tory supremo Stephen Taylor asks: “Who are the populists and who are the elitists?”

This would, of course, be a fairly asinine question on its face at the best of times, but it’s made even more so by his qualification “on twitter…” Presumably, a meaningless, completely artificial distinction can be made between Stephen Harper, Michael Ignatieff and Jack Layton according to the number of lonely berks “following” each of them on Twitter.

Given the mundane, impersonal nature of the “tweets” originated by the leaders (which likely are just executed by an office assistant in any case), it’s difficult to see what point there could possibly be in being a “follower” of such things, let alone how this would be indicative of some imagined populism or elitism. 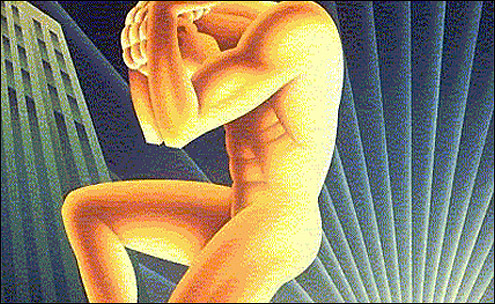 Somewhat related to the previous post, just when you think embittered right-wingers couldn’t get more ridiculous, petulant, and wholly irrelevant, along comes the crackpot notion of taking a page (or 40 of them to be precise) from Ayn Rand’s “Atlas Shrugged” as the rallying cry for their rebellion against the imagined “socialism” of the new Obama administration:

“Just this weekend,” said Rep. John Campbell (R-Calif.) on Wednesday in an interview with TWI, “I had a guy come up to me in my district and tell me that he was losing his interest in the business he’d run for years because the president wanted to punish him for his success. I think people are reading ‘Atlas Shrugged’ again because they’re trying to understand what happens to people of accomplishment, and people of talent and energy, when a government turns against them. That’s what appears to be happening right now.”

The plot of Rand’s novel is simple, despite its length — 1,088 pages in the current paperback edition. The United States is governed by bureaucrats, “looters” and “moochers,” who penalize and demonize creative people. The country is in decline because creative people are disappearing — they have followed the innovative John Galt to a mountain enclave, “Galt’s Gulch,” where they watch society crumble. Creativity has gone on strike (the working title of the novel was “The Strike”), and the engine of capitalism cannot run without it.

The following video is a visualization of Galt’s Speech using images and video from current events.

Heh. Rather than re-invent the wheel, I’ll just quote from one particularly funny comment (there are also many others worth reading in response to that Washington Independent article linked above):

Atlas Shrugged is as shallow as a Bible tract. The first 25 pages will tell you all you need to know about the book. Everything, and I mean Everything, is laid out in black and white. For example, all the people who do anything productive hate government. All the people who don’t hate government are useless, unproductive, spineless, lazy. All the heroes are productive masters of their universe who do not feel physical pain or fatigue simply because they will it to be so; who can do anything they want because they are super geniuses. It would take a few hours out of an afternoon for one of them to make a car out of dirt and some twigs, and run it with their amazing brain power. I picture them all wearing Superman capes.

I’m sure Rand fans swoon over these heroes, thinking, “boy, that’s me through and through!” but they are a cartoon. The bad guys are as two-dimensional as children’s unflattering stick figure drawings of people they’re mad at.

All you commenters with your phony threats of cutting back your work load and withholding from the world the benefits of YOUR amazing brain power seem to think that you’re all John Galts and Hank Reardens, that surely nobody else could step in and do what you do. Your threats are hollow because you aren’t Ayn Rand’s supermen — other people can take your place and they will jump at the chance.

Much like the “Tea Party” phenomenon, this latest grassroots “movement” seems in no small part fueled by the “class warfare” being hyped by right-wing pundits like Rush, Hannity, Beck and so on, all of whom appear to be either profoundly ignorant about the tax code and the way progressive taxation works, or (more likely) are simply flagrant liars pandering to their base of angry rubes.

Update: More on the efforts of “rightbloggers” to exhort their troops to “Go Galt” from the Village Voice. Quite typical of the mentality at work here was the suggestion made to Dr. Helen Smith (wife of Instapundit’s Glenn Reynolds) a while back that “productive people” stiff waiters and other parasites. While not endorsing the idea, she proposed leaving servers a snotty note instead. Doesn’t that perfectly sum up how deranged and cockeyed these folks are?

Update2: Digby has a great post about the pernicious nonsense of the Randians along with some insight into the value system and disgusting character of the “real” John Galts of this world. 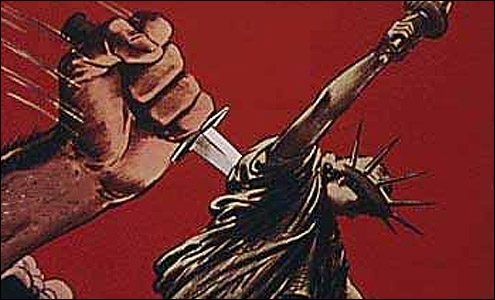 A popular refrain these days on the part of so-called “conservatives” that in the six short weeks since taking office President Obama’s straight talk about the serious economic challenges facing America is somehow directly and negatively influencing the investment climate on Wall Street — in effect, exacerbating the financial meltdown. Yet day in and day out it’s the Cassandras of the partisan right-wing blogscape who, like Rush Limbaugh, are actually hoping Obama fails and to that end, are relentlessly talking down the economy, wringing their hands and predicting nothing but inevitable doom ahead.

Take Junky Paul the Celestial Douchebag, for example. Of late, he’s been scribbling “a series of posts on the United States O-conomy … the Obama deficit” and yesterday even went so far as to pronounce that America is headed for a total economic collapse, likening it to “a train headed for a washed out bridge with villagers along the tracks shouting and warning …” I’ll spare you the gloomy hogwash of his post, but it’s a rather funny thing that the Junkster’s alarmed concern about the economy in general and deficits in particular is a rather new subject for him.

A search of the Junkster’s blog reveals almost no mention whatsoever of the economic cataclysm created under the watch of the previous administration. In fact, prior to the election of Obama, the next mention of budget deficits was more than two years ago, on May of 2007! At that time, Paul was delighted to inform readers that the Bush economy was chugging along at a fine pace despite “MSM priests of one stripe or other (usually shills for big-Left)…suggesting that the US economy was soft … or failing … or poised to fail … or whatever.”

Or whatever, indeed. It would appear that Paul’s newfound interest in the economy is nothing but wholly disingenuous partisan hackery motivated by his inexplicable hostility towards the new president, his knee-jerk loathing for all things “liberal” or “progressive” and his desire to be a shrieking cheerleader for what author Frank Schaeffer called “today’s fifth column sabotaging American renewal.”