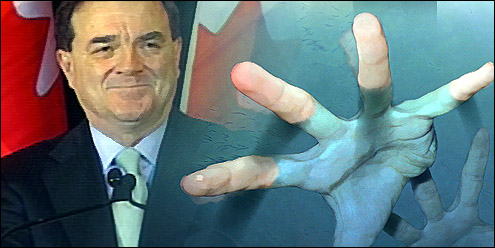 One might think that the prospect of THE STEPHEN HARPER GOVERNMENT® tabling deficits topping $40 BILLION for years to come might have caused some widespread degree of alarm amongst the so-called “Conservatives” posting over at “The Blogging Tories”… But of course you’d be entirely wrong.

Aside from a couple of minor grumbles, there’s barely a whimper of protest or any mention whatsoever about this truly shocking reversal of course from the same bunch of chuckleheads that had a shrieking conniption over the prospect of a $30 billion deficit when it was advanced by the Liberal-NDP “Coalition” before parliament was abruptly shut down last month.

So, how did we go from a “Conservative” government that recently vowed never, ever, under any circumstances, would it return to deficit spending and a leader that just weeks before the last fruitless, self-serving, cynical, and technically “illegal” election claimed that “All the fundamentals of the Canadian economy are good” and said “It’s not the time to do anything new, wild or stupid…” to plunging headfirst into years of massive deficits?

22 Replies to “Harper to Drown in Deficit”