It’s hard to see Iggy as much of a “change agent” for the LPC.

The vitriolic, hateful and profoundly ignorant comments attached to various mainstream media stories regarding his announcement are just a small taste of the vile, toxic nastiness to come…

Because I believe the country needs a leader like him right now – one who has a broader view, and who can lead us through the tremendously difficult economic times we all face. One who inspires people, and doesn’t simply offer cutesy quips. One with intellectual depth (like a Trudeau), and one with an unashamed love of this amazing country (like a Chrétien). One whose values – as I have now learned – more closely correspond to the values of Canadians: tolerance; diversity; respect; integrity. One who – unlike the ones across the aisle – isn’t angry at the things which make Canada great, and who seems to actually like the place. One who listens, as he did with me.

I read through his piece and the bottom line on the Ignatieff candidacy still seems to read: problematic. 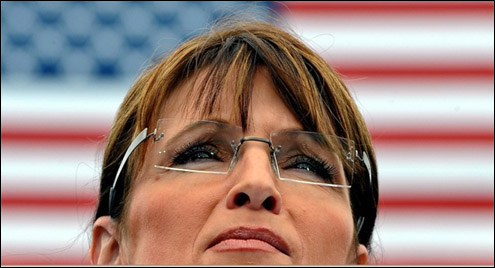 Palin seems to have become something of an obsessive fixation with Andrew Sullivan, but it’s damnably hard to fault his reasoning… or the visceral disgust:

This deluded and delusional woman still doesn’t understand what happened to her; still has no self-awareness; and has never been forced to accept her obvious limitations. She cannot keep even the most trivial story straight; she repeats untruths with a ferocity and calm that is reserved only to the clinically unhinged; she has the educational level of a high school drop-out; and regards ignorance as some kind of achievement. It is excruciating to watch her – but more excruciating to watch those who feel obliged to defend her.

It’s certainly a complete mystery to me.

“Train wreck” is being charitable – it’s more like a train derailing on a bridge, tumbling a thousand feet into a canyon and landing on a pile of old dynamite and gas drums. And then a jumbo jet crashes into the flaming wreckage. Followed by an earthquake that causes the whole mess to slide off a cliff into the sea, where the few miraculous survivors are eaten by sharks…

Or to borrow from Monty Python (in regards to a rather unfortunate castle): “Then it burned down, fell over, and then sank into the swamp…”

Another one bites the dust. How completely unsurprising. OMOV folks…

Political dispatches from a 7 yr. old that are far more intelligent than 90% of “The Blogging Tories”…

Here is why I’m asking grown-ups to vote for Barack Obama. I am 7 years old so I can’t vote……

My mom told me that I shouldn’t base my election analysis on “feelings” (I like him/her) or “beliefs” (I share his/her beliefs) but on logical arguments. She asked me to create my own rational explanations for my support of Obama. Here is one of my arguments:

Governor Palin believes the world is 6000 years old. This is absurd. This is not a rational belief. This is a mistake. Scientists, experiments and evidence have shown this to be completely false. Therefore, she is not rational. If she is not rational, she should not be allowed to be President or Vice President.
Please vote for Barack Obama.

Seven years old, ladies and gents… Think about that.

What on earth is going on with the astronomical trillion dollar “bail-out” of the economy?

So, buying up all of Wall Street’s toxic debt was going to be the answer to fix things, but now that’s out the window and Treasury Secretary Paulson figures the “solution” is to funnel money directly into the banks…

In case you didn’t notice, yesterday, the “Conservatives” plowed another $52 BILLION dollars into the real-estate market (the fundamentals of which are “sound” we were told just last month) and soon they will be pumping billions of more “magic” money into the automotive sector to keep them from sliding into insolvency… How’s that whole “free market” deal working out, by the way?

Meanwhile… we have this kind of massive wankertude going on.

Q: Do Canadians care about Afstan any more?

Anyone who subscribes to the sentimental idiocy put forward by David Bercuson (and reiterated by “The Torch” the other day) is simply bound and determined to continue on a ridiculous March of Folly that’s doomed to inevitable failure. Forgetting the war in Afghanistan won’t hurt Canada in the least — in fact, we’d be a lot better off if we just pulled out altogether ASAP (although we’re committed to sticking it out for a few more years thanks to the political expediency and cunning machinations of our present government).

It’s a total waste of money, resources and effort that’s going nowhere fast. The “Herculean effort” on the part of NATO that’s fantastically imagined by Bercuson isn’t going to be forthcoming, so don’t hold your breath on that deal and Obama’s resolute promises will all too likely melt away like snowcones at the last Iowa State Fair… It was another misguided, misbegotten crapfest in a dismal part of the world that nobody in their right mind actually gives a rat’s ass about. If you’re worried about “terrorists” then simply pay the Taliban to kill them — they’ll quite happily do so for a price.

My sexual prowess has been questioned, I’ve been accused of being an ageing fossil who doesn’t know how to Google shit, a guilty white man ashamed of my race, an idiot and a pro-censorship traitor to journalism. My qualifications to teach anyone anything anywhere have been mocked in public.

And I realize this stuff will be permanently parked on the Internet to be read, perhaps, by my grandchildren some day.

I blame it all on Ezra Levant.

Canada’s sawed-off, ultra-right-wing Sultan of Shout likes to wage nuclear war with anyone who dares to hold a reasonable thought in his presence, which means he never has any shortage of material to put up on his half-cocked personal blogging site.

He’s spawned an army of imitators who seem to hang on his every word. He links to scores of “Ezra Lites” like Small Dead Animals, Free Canuckistan, Chucker Canuck, Barrel Strength, Defend Canada, Angry Rough Neck, Just Right, Right as Rain, Right Crazy and Being Right is not Wrong.

Tell me professor: Are they all mean-spirited, reactionary and high-decibel? Why, yes they are! It’s like asking does Mark Steyn seem to enjoy getting under your skin?

Well, there’s certainly a lot of angry rhetoric on blogs to be sure, but I don’t know that Miller has really advanced the argument much here with his retaliatory sniping and plaintive moaning about some bloggers being rather mean. And yes, professor… they are! Quite horrifically so, in fact.

The “fragrantly hyphenated” Yasmin Alibhai-Brown addressed the phenomenon of inchoate online rage so much better and more comprehensively a number of years ago. As if to prove the point, it might also be noted that when she appeared on Iain Dale’s 18 Doughty Street a while back she was accused by commenters of “murdering her unborn child” (and would burn in Hell as a result) and was denounced as a racist “cunt”…