Not to sound overly smug or anything, but man… is the American electoral system ever messed up.

In the last federal election I got on my bike and rode down to the local poll (located in the gymnasium of an elementary school just down the road) and even though it was fairly busy with early morning voters casting their ballots on the way to work, it took me all of ten minutes (double that including the time expended getting there and back).

Q: Would I have stood in line for hours? A: Not on your life. 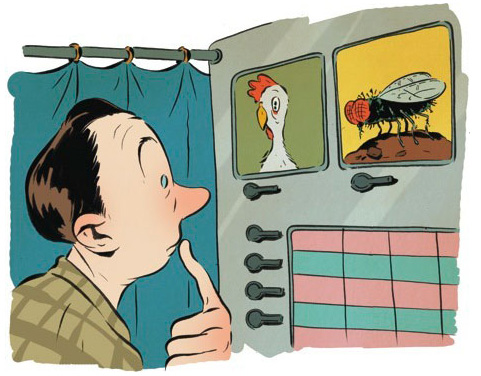 Quite amazingly, CNN was reporting today that the day before the election, 5% of people are still firmly lodged in the “undecided” camp. What precisely is the major malfunction of these dithering wafflers? Are they perhaps waiting for one candidate to burst into flames before finally making up their minds? “Well, that’s it then. I couldn’t possibly vote for someone who’s engulfed in flames!” one imagines them finally exclaiming with some relief.

Speaking of which, David Sedaris metaphorically describes the false dilemma of the “undecided” rather nicely in the most recent New Yorker:

To put them in perspective, I think of being on an airplane. The flight attendant comes down the aisle with her food cart and, eventually, parks it beside my seat. “Can I interest you in the chicken?” she asks. “Or would you prefer the platter of shit with bits of broken glass in it?”

To be undecided in this election is to pause for a moment and then ask how the chicken is cooked.

Sedaris could be right about these people being the ultimate kind of pessimists, but I’d suggest that rather than calling them “Undecided” as a polling category, they might be more accurately referred to as the “Indecisive.”

You just knew that upon hearing news of Obama’s grandmother Madelyn Payne Dunham passing away earlier today that there would someone on the Right who would be unable to resist using even that unfortunate event to take a shot at the Democratic presidential contender… And sure enough, here he is ladies and gents: Jim Hoft, the so-called “Gateway Pundit.” After providing a short obituary note from the Washington Post he writes:

Earlier this year she came up in the campaign when Barack Obama compared her to his racist anti-Semitic “G-Damning America” preacher.

Aside from being gratuitous and inappropriate, the statement is a misleading distortion of Obama’s remarks in a March 18 speech that he gave in Philadelphia designed to both denounce and defend his former, controversial pastor, the Rev. Jeremiah Wright. It seems that Hoft included his snide comment simply for the opportunity to link to an old piece of his about Wright (since changed to a YouTube video of Fox News footage of his well known speech blasting America).

Meanwhile, over at “Hot Air” Captain Ed was forced to admonish some of his readers:

Those commenters “questioning the timing” need to get a life. Those wishing ill on Senator Obama or his family (in the past or present day) will find their comments deleted. Get classy and stay that way, please.

Update: A true glimpse at the rotten bottom of the barrel here. Sad.

I still think that Obama is the “lesser evil” but it’s really just a matter of degrees, something that should never be lost sight of.

Oops, I guess that’s quite in the “tone it down” spirit is it?

Gee, I wonder how St. “Raphael” would handle this in a non-inflammatory, non-provocative, non-confrontational way… presumably in a manner just sparkling with cool equanimity and diplomatic aplomb… you know, so as not to offend anyone and thereby conceivably provoke their wrath? I mean, one certainly wouldn’t want to verge on calling this woman “stupid” now would one? Heaven forbid! So come on… clue us in “Raphael” — why don’t you give us another invaluable “tip” as to how you’d tackle this one.

Aside from a bit of gratuitous fun at the expense of the “mavericky” Governor of Alaska, but doggone it, I just can’t get enough of DJ Madson’s hypnotic, wonderfully foreboding track running in the background.

You are just an illustration
This is just a simulation
Lines and pixels on a piece of paper
Is this the real thing?

Absolutely brilliant! How soon will it be featured on Liblogs?

Update2: Heh. Well his quitting blogging lasted approx. one day. And he’s since deleted all of his previous entries. (Like I should talk…)