Okay, we revive this tiresome jest simply to note that it appears the comments to Ms. Raitt’s phony “blog” were closed down after ONE person asked a perfectly reasonable question in a nice, polite way with a “real world” name, e-mail, and so on attached to it about the issue of child care.

Apparently, Jennifer at Runesmith had the audacious temerity to ask “…how many of the 125,000 new child care spaces the Conservatives had promised would be created through employee tax credits had actually been created so far?” Yep, that was it… ONE question. Somewhat awkwardly worded, but still… that little interrogative it would seem is all it took to bring Raitt’s blog to its knees.

These are the people who eagerly commit untold billions of dollars of your tax dollars to fight an unseen enemy on the other side of the planet, earnestly vowing to wrestle with a phantom menace at the Gates of Hell, and whose whole platform from the last election was about “standing up” for average, ordinary, working citizens… Well, that is until they dare ask a question. In that case, it’s suddenly “Run away! Run away! Run away! Run away! Run away!”

Great name. I suppose it would be kind of cranky and old-fartish of me to harbour thoughts in the recesses of my evil head that maybe… just maybe there’s something a wee bit pernicious and creepy about Google, wouldn’t there?

Aside from emulating Apple’s i-Phone with remarkable ease, it’s somewhat unnerving that this new gadget can leverage GPS capacities to track a user’s carbon footprint while driving in a car or comparison shop based on scanning bar-codes (this will be checked against prices in nearby stores). All quite cool, but more than a few shades of Phillip K Dick as well…

Last year, Google and T-Mobile offered $10 million in prizes to software developers to create new Android applications that can be checked out here.

Just for fun, I can’t resist (it’s futile!) throwing this video in (not much of a Star Wars fan I have to confess, but this is good)…

Take heart fellow Liberals, if you think Dion is somewhat less than inspirational, here’s Britain’s beleaguered Labour leader, Gordon Brown, delivering his pitch (perhaps a make-or-break effort) to the party faithful at the conference taking place in Manchester and vowing to guide the U.K. through the challenging economic times ahead… Hmmm. Sounds rather familiar, doesn’t it?

Standing before a backdrop bearing the slogan “Winning the Fight for Britain’s Future,” Brown set out a monotonous range of plans that he called “a new settlement for new times” (also referred to as “A Fair Britain for the New Age”) to help British voters with issues ranging from prescription charges to care for the elderly, free nursery education for two-year-olds and linking disadvantaged schoolchildren up to the Internet, and so on. One imagines there will be a great wave of disinterest and much snoring across the land.

What more do you need to know in 29 seconds? Sheesh.

I mean, what were you looking for? Something like this… 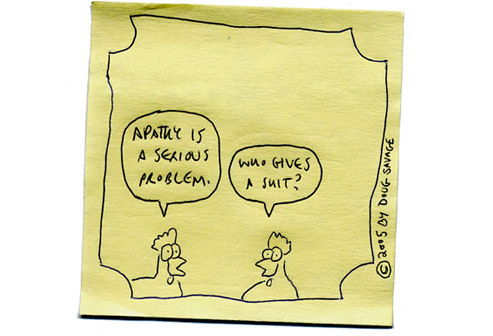 Stop the presses….“it doesn’t appear that Canadians are getting too excited about this election when compared to previous elections.” Again, I’m just completely stunned by this entirely unexpected development.

Completely baffling, isn’t it? You simply cannot en-com-pass the extent of my amazement at this shocking news.

This is perplexing to say the least (more here, here and here).

“Think of every possible pun involving stones, rocks and prehistoric times, and link them to a pea-brained story that creaks and groans on its laborious march through unspeakably obvious, labored and idiotic humor…” So wrote Roger Ebert almost ten years ago. Now, he’s peddling creationist rubbish and quizzically musing about the absurdity of moose… Go figure.