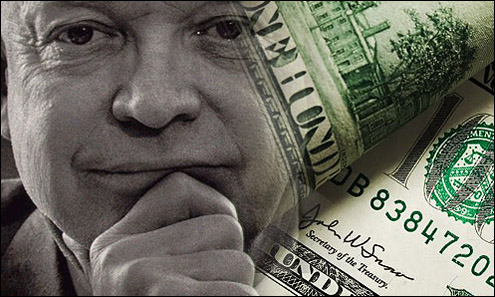 Speaking to members of the Laborers International Union of North America in Akron, Ohio this afternoon Joe Biden called McCain’s approach to the current economic crisis “the ultimate bridge to nowhere” and said that paying higher taxes would be patriotic for wealthier Americans. “We want to take money and put it back in the pocket of middle-class people,” Biden said. Of those who would pay more, he said: “It’s time to be patriotic… time to jump in, time to be part of the deal, time to help get America out of the rut.”

“Raising taxes in a tough economy isn’t patriotic. It’s not a badge of honor. It’s just plain dumb,” McCain said. “The billions in tax increases that Sen. Obama is proposing would kill even more jobs during tough economic times. I’m not going to let that happen.”

McCain’s dissembling and blatant lies aside, the notion of it being a “patriotic” act for the highest earners to pay additional taxes in order to help America reduce its massive deficit or otherwise claw its way out the present “rut” and get the economy back on a more even keel is an interesting one to say the least, politically speaking. The redistribution of tax burden being proposed represents an idea that’s become something of an anathema in the U.S. (and to a lesser extent in Canada, Britain and Australia) over the last 30 years, ever since supply-side economics took hold as the prevailing dogma through four successive administrations.

Even Bill Clinton, hardly as liberal as some pretend, cut taxes for the wealthiest percentile by 2.6%. Bush is only the latest president that’s preached the gospel of the “trickle down effect” while slashing tax rates for the wealthiest. As a result, the marginal tax rates on the highest-income tax bracket now stands at 35% and the capital gains tax rate is at an all-time low of 15%. This is why the middle class, who are dependent on earned income, effectively pay taxes at a higher rate than do the wealthy — a simple fact pointed out not that long ago by Warren Buffet, one of the richest men in the world.

Doubtless, there may well be some on the right who feel even the current rates are egregious and would love nothing more than to cut them further still. Many will be conditioned to automatically militate against the changes being proposed to the tax regime and will brand it as invidious “socialism” or some such rubbish.

But it wasn’t always so. During the Eisenhower years — arguably, a conservative idyll of sorts — the highest tax rate on income over $400,000 stood at a whopping 92 percent, almost three times higher than the present top rate! Unlike the situation today where capital gains are taxed at a far lower rate than earned income, in Ike’s time, capital gains weren’t treated differently. In other words, the rate on this particular form of income has dropped over the years from 92% to 15%. The rich get richer and all that…

It should be noted that in 1955, in the middle of Ike’s presidency, the typical (median) family paid less than 20% in all taxes. By 2003, the total of all taxes paid by a typical family in the U.S. had more than doubled, to almost 40% of income. The bottom line is that in Eisenhower’s day, the rich paid a tremendous amount of taxes, the middle-class paid comparatively little taxes, and yet… somehow it all worked out. Take a look at nation’s balance sheet now and see if the same thing can be said.

So was it “patriotic” of the wealthiest to carry such a massively lopsided share of the tax burden back then? Perhaps that may not be the most apposite word to describe it, but consider Ike’s reaction when pressured by some in Congress at the time to reduce taxes on the rich. “We cannot afford to reduce taxes, reduce income, until we have in sight a program of expenditure that shows that the factors of income and outgo will be balanced,” he said. In fact, Ike did relent somewhat during his last term, lowering the top rate on earned income by a paltry 1%. Now that’s fiscal conservatism!

Still, getting people to accept the somewhat novel concept of “patriotic” taxation for the highest earners will likely prove to be a challenging proposition for Obama and Biden in the present economic climate. The first problem is that it can and will be misrepresented; indeed, McCain has already done so.

Secondly, it has to be considered that for a great many people, all they’ve heard throughout their entire working lives is the now conventional wisdom of “trickle down economics” emanating from the halls of elite think tanks like the Heritage Foundation and preached ad nausea by right-wing ideologues. According to this theory — once quite rightly described as “voodoo economics” — any rise in tax for the highest earners will have a devastating effect on the economy and would inevitably “kill jobs” as future President Sarah Palin so eloquently put it. And what proof do we have of this? Absolutely nothing, in fact. Nothing that is, but the dire predictions of the same bunch of geniuses that are the architects of the present mess — so why should anyone believe them I wonder?

Update: Well, that didn’t take long did it? As Mark Twain famously said, “A lie can travel half way around the world while the truth is putting on its shoes.”

Bonus: When she gets to Warshington, Palin’s gonna “crush that gridlock”… 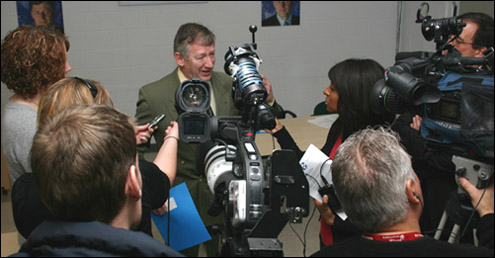 A renegade Tory candidate? How the heck did that happen?

But uh-oh! Don’t get your hopes up. On closer inspection, it would seem that Gallinger’s sensational headline (in bold above) is highly misleading. In the article it says Labelle feels that Flaherty’s attitude toward Ontario has been “horrible” whereas the author had led us to believe the reference was being made more generally to “Harpernomics” — a term I rather doubt Labelle used. The candidate’s other criticisms such as describing the Conservatives’ environment plan as being “insufficient” are fairly tepid, if not downright sheepish. So maybe he’s not such a rebel after all.

Still, rather curious that he doesn’t have one of the party’s “cookie cutter” websites but seems to have opted for his own solution. For a party with such an obsessive concern about all aspects of message control and lockstep behaviour, even that small difference is a remarkable departure — in form if not perhaps substance. 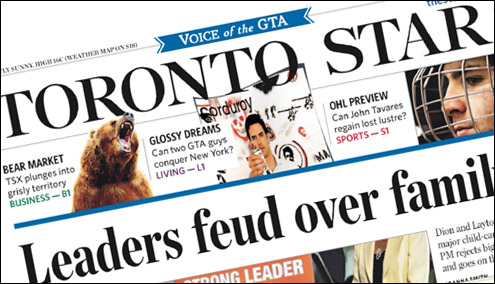 I gather that Bob Hepburn isn’t much enamoured with Stéphane Dion.

Dion likely was the wrong person to lead the Liberals in the first place. In the 2006 Liberal leadership race against Bob Rae and Michael Ignatieff, his geeky demeanour, his leather backpack, his tortured English seemed so fresh, so non-traditional that it was in many ways appealing. He had good policies on the environment; he appealed to many young Liberals.

But he squandered his chance to become a true leader of the party.

Now, after 20 months of non-stop attack by Conservative Prime Minister Stephen Harper, with his take-no-prisoners approach to politics, Dion is no longer so appealing.

He has not risen in stature. He remains cool, aloof, an academic who seems to believe he’s the smartest person in every room he enters and that he really doesn’t need anyone’s advice.

Ultimately, Dion must take the blame for the miserable campaign.

As opposition leader, his first job was to get his party ready for an election. That meant recruiting the best campaign organizers for a 21st-century election, rebuilding party finances, luring top candidates, soothing the warring internal factions, making himself media savvy.

He has done none of that.

Why does Stephen Harper need an expensive war-room in Ottawa launching relentless attacks against the Liberal leader when there’s the nasty scribes of the Toronto Star’s editorial room doing the same thing for free? Every single day. Go liberal media!

Meanwhile, over at Macleans, Chris Selley (Megapundit) has this to say about the new “team” approach the Liberals have taken over the last several days:

It “sounds obtuse” to send Stéphane Dion out on parade with his would-be successors in tow, Lawrence Martin writes in The Globe and Mail, but having Bob Rae around seems to have “enliven[ed]” Dion, and in any case it’s “probably the only way for the besieged professor to get out from under his nimbus of vulnerability.” Indeed it is, and it doesn’t sound the least bit obtuse to us, either. If you had Rae, Michael Ignatieff, Gerard Kennedy, Martha Hall Findley and Marc Garneau (we’ll pretend Martin didn’t mention Justin Trudeau among the luminaries), wouldn’t you want to publicly contrast that team against Harper’s gang of nobodies, hacks, mimbos and Common Sense Revolution refugees?

Heh. What a superlative description of Harper’s cabinet there at the end. 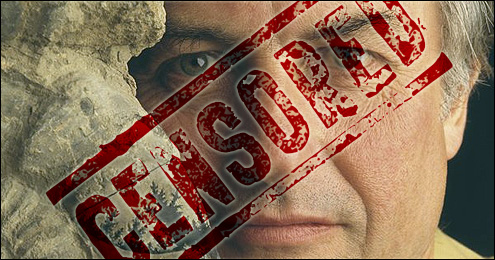 You may have heard already that the official Dawkins website has been banned by a Turkish court after Adnan Oktar (aka Harun Yahya), a Muslim creationist and convicted sex offender, claimed its contents were defamatory and blasphemous. Irony abounds.

There’s probably a lot more than meets the eye to this decision. A Turkish apologist in the comments at Dawkins’ site suspected some judicial cronyism may have been involved. Still, it’s hard not see it as a bizarre edict in a state that claims to be staunchly secular and it goes without saying that this kind of censorship only harms Turkish efforts to join the European Union (which may not be an altogether bad thing).

It seems that yesterday, old Gerry was “Reviewing the Liberal Ad” and had this to say of it: “OK this Liberal TV ad has got to be one of the weirdest political spots I have ever seen.”

Only thing is that the “ad” in question isn’t a “political spot” at all, it’s the promotional video that the Liberals put out to accompany the launch of the Green Shift policy back in the summer.

Has he never seen it before? It was released last June, but he actually seems to think that it’s one of the Libs’ current election ads. Oy.

Another day and another question about the mental faculties and/or foreign policy judgment of John McCain. Today it’s whether he actually considers Spain an enemy of the USA or did he forget that the country is in Europe and a member of NATO?

McCain adviser Randy Scheunemann told the Washington Post that McCain knew who the interviewer was talking about. “The questioner asked several times about Senator McCain’s willingness to meet Zapatero (and id’d him in the question so there is no doubt Senator McCain knew exactly to whom the question referred). Sen. McCain refused to commit to a White House meeting with President Zapatero in this interview.”