Too bad that Dion can’t explain his “Green Shift” plan as clearly as Elizabeth May seems able to when discussing the Greens’ own proposed carbon tax. If you missed this face-off between her and Jack Layton over their respective plans on CTV’s Question Period earlier this summer, here it is again.

Contrary to Jack’s glowing assessment of the European experience with cap-and-trade, the reality is quite different as this article from last year that appeared in the Washington Post details. Another report from Business Week indicates that despite creating a massive new level of bureaucracy, the EU Greenhouse Gas Emission Trading Scheme (EU ETS) has little to show for itself in terms of environmental benefits. In fact, Europe’s carbon dioxide output actually rose 1.1 percent last year.

Interesting to see Jack being kicked around a little, at least online.

I’m not sure who’s responsible for the video, but this is from the blurb on YouTube:

Jack Layton has fallen down a credibility hole of his own digging. Ever the humble communicator, he is crediting his father for helping to design wind turbines and helping to come up with the idea that we could mobilize wind power and giving him credit for the origins of windpower on the Gaspé Peninsula.

But that is only the beginning. He goes on to bring his brother Rob into the picture and continues to espouse his families role in creating what he guesses was in some ways, the first hybrid car.

The problem is, as the Toronto Star reports, when Jacks sister Nancy was asked about this part of her families [sic] history after climbing on the Layton campaign bus, she smiled and said the family invention was news to her.

I wonder whether this apparent tall-tale will become a running joke as was the case with Al Gore back in 2000, especially as the Conservatives are now going to be directing more of their attacks at both the NDP and the Greens.

I haven’t really been following the election much over the past week, so apologies if you’ve already seen this video of Jason Kenny in the Conservative “war room” at the beginning of last week trotting out a pack of lies (“fact check” here) while Transport Minister Lawrence Cannon looks on awkwardly.

It’s hard to believe this feeble-minded idiocy is the caliber of output coming from the Conservative brain-trust, but then what’s the alternative?

It was the first day of the federal election and Stephane Dion was at the back of his big red bus, anxious to hit the campaign trail.

Presented with the standard interview ice-breaker about how was he feeling, Dion told me: “I am pleased to have the opportunity to reach Canadians more than ever because an election is where Canadians are focusing on the choice they have to make.”

Dion predicted the campaign would be about the economy and the environment “and who I am and what I stand for, why I think I am ready for this job to be prime minister of this country.”

One week later, Dion’s campaign of confusion is connecting with ordinary Canadians like a lecture on quantum physics.

Oh dear… we are so screwed.

Speaking of which, I note that National Newswatch has a “24 Hour Market Crisis Watch” on its site. How jolly.

Here’s a somewhat interesting take on the Canadian election from Slate magazine:

Last Sunday, news came that Canada — sensible, quiet, some would even say boring Canada — will hold an election on Oct. 14, its third in four years. Those outside the country may wonder what the problem is; in Canada, after all, health care is free, the dollar is strong, same-sex marriage is legal, and the government had the good sense to stay out of Iraq. You might think of Canada as the un-America, where the only debate ought to be whether to spend the country’s growing oil wealth on faster snowmobiles, bigger hockey rinks, or Anne Murray box sets.

But beneath the calm exterior, Canada’s political system is in turmoil. Since 2004, a succession of unstable minority governments has led to a constant campaign frenzy, brutalizing Canada’s once-broad political consensus and producing a series of policies at odds with the country’s socially liberal, fiscally conservative identity. Canada is quietly becoming a political basket case, and this latest election may make things even worse.

It’s a pretty bleak assessment, but then what isn’t these days?

You may have seen the former Federal Reserve Chair Alan Greenspan talking this morning on ABC’s This Week program with George Stephanopoulos in his usual convoluted, maddeningly elliptical fashion about the US economy but observing in a moment of singular clarity that it was by far the worst economic crisis he’s seen in his career.

“There’s no question that this is in the process of outstripping anything I’ve seen, and it still is not resolved and it still has a way to go,” he said.

“Outstripping” — well there’s a lovely new buzzword to describe the way in which the industrial heartland of North America has been raped and left for dead in the name of globalization, corporate efficiency and other free-market rationalizations over the past twenty years.

Asked if we’ll see the failure of more financial institutions, Greenspan affirmed “I suspect we will.” Not to worry… Great things are afoot in small-town America!

As for “the process of oustripping” Greenspan said that “…it will continue to be a corrosive force until the price of homes in the United States stabilizes. That will induce a series of events around the globe which will stabilize the system.”

It reminds us a little of this. 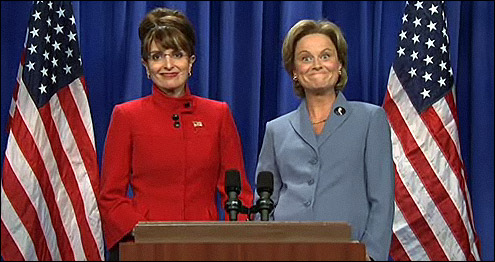 I missed this mock joint appearance on SNL last night as we’ve long-since stopped watching that show, especially since Tina Fey left to concentrate on the wonderful 30 Rock — a vastly funnier, wickedly trenchant and altogether more sophisticated show that can’t be recommend highly enough — but thanks to Joseph in the comments for providing the link here.

“I’m sorry, I need to say something. I didn’t want a woman to be president, I wanted to be president and I just happened to be a woman. And I don’t want to hear you compare your road to the White House to my road to the White House. I scratched and clawed through mud and barbed wire… and you just glided in on a dog sled, wearing your pageant sash and your Tina Fey glasses.” — Amy Poehler (speaking as Hillary Clinton)

An especially hilarious exchange was when Fey (Palin) said, “You know, Hillary and I don’t agree on everything …” to which Poehler (Clinton) pointedly snarked, “Anything” and then went on to say, “I believe that diplomacy should be the cornerstone of any foreign policy” to which Fey (Palin) dryly snapped back: “And I can see Russia from my house.” Similarly, Clinton was given to say “I believe global warming is caused by man” contradicted by Palin’s smug retort that it was “just God hugging us closer.”

So, I had this epiphany of sorts the other day after watching (and painfully re-watching with increasingly awestruck degrees of mortified horror and stunned, terrified disgust) the jaw-dropping stupidity of the Sarah Palin interview ABC’s Charlie Gibson earlier in the week.

It seemed to encapsulate many of the subtexts and themes that we’ve been rather humorously touching on here over the past few months; namely, the relentless “stupidification” of our politics and the painfully tragic dumbing-down of our political discourse. Moreover, it perfectly embodied in spades the “Blizzard of Lies” that Paul Krugman spoke of earlier in the week, an observation that’s not gone unnoticed by many other keen observers of the political scene.

We do indeed find ourselves rather bewildered and utterly perplexed at being in the midst of a horrific maelstrom of lies. After eight years of the massive incompetence, cronyism, and kleptrocracy under the Bush administration that recklessly plunged America into a hellacious clusterfuck of truly monumental proportions largely for the sake of a highly dubious ideological agenda — come on, folks… a national debt approaching $10 trillion and an annual deficit of $500 billion, the spectacular collapse of the mortgage lending industry, the biggest nationalization of an industry since the 30s, not to mention an illegal, blundering $550 billion misadventure in the Middle East “that is from God” … and so on, are we really supposed to accept the absurd premise that a shrill, inane, clueless, utterly dumbfuck, religious wingnut mayor of some remote town in Alaska that’s apparently highly populated with meth-labs will be the next leader of the free world?

That is of course supposing the crazy, absent-minded, septuagenarian, cancer-ridden old coot who crashed five planes in his military career and made 32 anti-American propaganda films on behalf of his Vietnamese captors as a prisoner of war… The man who finished fifth from the bottom of his class at the Naval Academy, is a self-described computer illiterate that can barely get the news clips that have his name on them, who absurdly claims he that he possesses unique knowledge as to the whereabouts of Osama Bin Laden (in close proximity to the “Gates of Hell” we’re told with confidence)…and who now seems eager to reinvigorate the Cold War at the behest of his lobbyist advisers, or perhaps even initiate a potentially catastrophic nuclear show-down with Russia over the slightest provocation, doesn’t kick the bucket while in office.

Sorry to be blunt and perhaps even somewhat offensive about the matter, but man, oh, man… this is some incredibly fucked up shit going down right now.