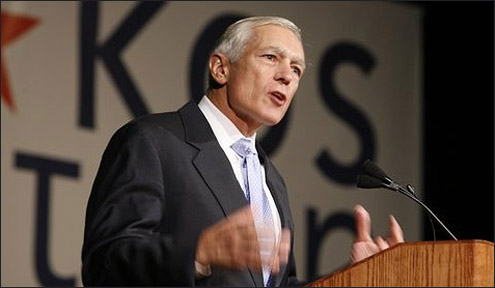 Steve Clemons at The Washington Note confirms that Gen. Wesley Clark has been told by the Obama campaign team that there’s “no reason to come” to the upcoming Democratic convention.

As Clemons points out, this is fairly wounding considering that the “theme” of Wednesday’s convention agenda is “Securing America” which also happens to the very same name as Clark’s political action committee. It should also be noted that WesPAC’s primary goal is to “Elect Democrats to the White House…”

Although he’s very popular with the party’s netroots, Clark isn’t universally loved by veterans, some of whom regard him as a “perfumed prince” and self-aggrandizing media hound. More to the point, he made the fatal mistake recently of pointing out the obvious: getting “shot down in plane” doesn’t automatically qualify you to be president of the United States — a statement that infuriated many veterans and right-wingers who seem to feel otherwise.