“Isn’t free speech a great thing?” asked the emcee after Stephen Harper wrapped up his address to the crowd of thousands gathered in front of the legislature to celebrate B.C.’s 150th anniversary. The prime minister, who looked especially pale and doughy, had unfortunately been loudly heckled by a small but highly vocal group of protesters shouting “Traitor!” throughout his brief remarks.

That effectively spoiled the PM’s upbeat, but rather mundane salutation extolling the many fine qualities of the “jewel of the Pacific” as he called the province, that with great originality, he said was vitally linked to the future of Canada. Blah, blah, blah…

“You appear to be in the minority,” the emcee continued, directing his comments to the disruptive protesters. “Most people here just want to have a good time. Am I right?” To which, of course, the sun-seeking crowd of partiers dutifully responded with an enthusiastic roar of approval.

Shortly before that, just prior to the event’s official kick-off actually, a raging granny wearing tight-fitting Guess jeans, T-shirt and a floppy straw hat, who was poised at the very front of the crowd, suddenly jabbed her finger into the air, pointing it in the direction of the stage where Harper, Campbell and various MPs and MLAs were assembled. In what was presumably intended to be a “J’Accuse!” moment of high drama, she shouted out “Bring back Omar!” This petulant demand was met however with a collective wave of eye-rolling and a palpable groan from the crowd.

A number of infuriated onlookers then viciously turned on the protester. “Fuck off!” screamed one incensed woman just behind me. “Fuck off — right now!” she vehemently repeated. An elderly man then rose up and clumsily accosted the lady in the straw hat in an attempt to muzzle her. In defense, she started throwing punches in return to fend off the feeble attacker. After this fun-filled scuffle had subsided, the woman indignantly stormed away from the grounds, her ideological mission having been accomplished one guesses, and the event proceeded on schedule with members of the Esquimalt First Nation furiously drumming, dancing and whooping it up in fine style. 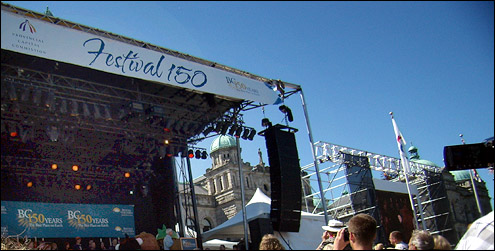 Funnily enough, I almost got into a fight myself because I had the impertinence to thread my way to the front of the crowd and stand near the guard rail in order to take pictures. Behind me I could hear grumbling from people that had arrived much earlier and staked out their territory on the lawn with chairs, blankets and picnic coolers. “These people… they come late and then stand in front of us. It’s ignorant and inconsiderate!” said the grumblers loudly in an effort to inflict shame on upright interlopers such as me.

Naturally, I ignored their peevish complaints, but eventually, one enraged old crank who was utterly fed up at having his view blocked got confrontational about it, aggressively demanding that I sit down. I waggled my cane in his face and told the old coot that I couldn’t just “sit down” and then asked him how much he’d paid for his seat at this event. “Oh right — nothing!” I snapped before he’d even had a chance to process my rhetorical question. Good grief, what a truly awful person I am sometimes. 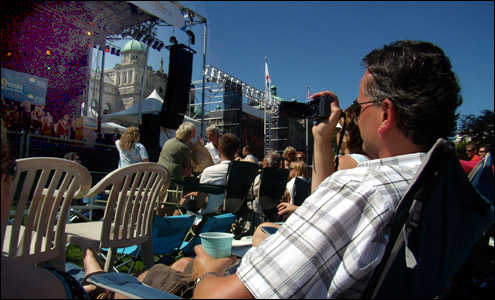 But aside from that nasty bit of unpleasantness, things were pretty relaxed and laid back, as one would expect on a balmy summer day in Victoria. Oh sure, the Council of Canadians was there with an insignificant contingent of wannabe hippies and a few discrete (and rather cryptic) protest signs could be spotted here and there in the crowd, but for the most part the emcee was right — people weren’t in the least bit interested in political theatrics at all — they just wanted to have a “good time” more than anything else. I spoke with a couple of women who were quietly protesting against the “corporatization” of Canada’s water supply and remarked on the possible futility of their endevour under the circumstances, but they equanimously maintained that it was important to have “visibility” at such events. Whatever…

I missed the cake-cutting photo-op, err, ceremony. But I did hear the great and good notables yammering about it and singing “Happy Birthday” to the province over the loudspeakers (also shown on the jumbo TV screens that flanked the legislature) as I was walking back up Government Street into town. There, hundreds of people were milling about the causeway, wandering even more aimlessly than usual, perhaps due to traffic having been banished from the area. Some had plunked themselves down on any open patch of ground, even the grass medians of intersections were occupied for impromptu tailgate parties. Getting into the spirit of things, the Empress Hotel moved their iconic tearoom outdoors to allow the clotted cream set to enjoy the day’s festivities in the sun along with their tea and scones.

Shortly afterwards, the Snowbirds (431 Squadron) put in an appearance, repeatedly strafing the city with multiple demonstrations of their impressive aerial acrobatics. That really made the day worthwhile for me. I dearly wish that I’d had a better camera to capture some of the great images of them soaring overhead at terrific speed. 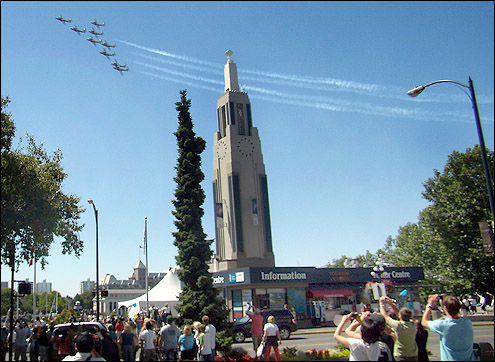 As it turned out, my favourite brewpub was shuttered for the holiday, so I ended up at the Sticky Wicket in the Strathcona Hotel. Despite the throngs of people on the street, the place was dead as a doornail, which was fine by me. A clubby atmosphere with leather couches, free wi-fi connection, pale ale on tap and a basket of their awesome, crunchy French Fries… Heaven! 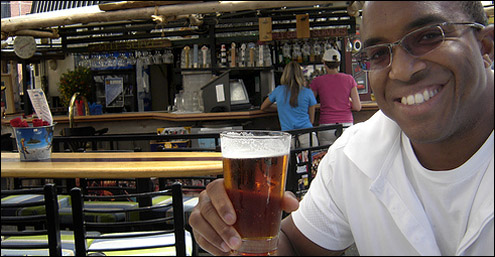 Speaking of which, just before catching my bus back to the Westshore (I did the “Park-n-Ride” thing), I was handed “A Traveller’s Guide to Heaven” by relentlessly cheerful proselytizer on Douglas Street (the nexus for religious kooks, apparently) published by an outfit called Evangelical Tract Distributors in Edmonton. It’s pretty funny stuff. Under the section entitled “Currency” it states that “Supplies of currency may be forwarded ahead [to heaven] to await the passenger’s arrival. Deposits should be as large as possible.” But contradictory to that, under the section entitled “Luggage” it says “No luggage whatsoever can be taken.” The logic escapes me.

17 Replies to “Harper Visits the “Jewel of the Pacific””