The Next Hockey Night in Canada Theme?

I’m sure this will drive fans of “Canada’s second National Anthem” quite mad. Not to mention all those inveterate CBC-haters out there, of course.

With 23,897 views and the second-highest rating on the site, “Hockey Scores” — an endearingly insane cacophony of screaming babies, screeching animals and gunshot blasts submitted by one Logan Aube — has positioned itself as a potential frontrunner to become the next Hockey Night theme song and the recipient of a $100,000 prize.

I dunno, it’s kind of amusing. Not sure if Joe Six-Pack in Brampton really wants to listen to an expressionistic cacophony like this at 7:00 pm though.

As noted in The Huffington Post “Even The Wall Street Journal’s famed stipple portraits (known internally as “hedcuts”) aren’t immune from the bummer that is the credit crisis.

Pictured above are before and after pictures of Citigroup CEO Vikram Pandit Treasury Secretary Hank Paulson. From sanguine to grim…

Maybe we should pay closer attention to these little details. 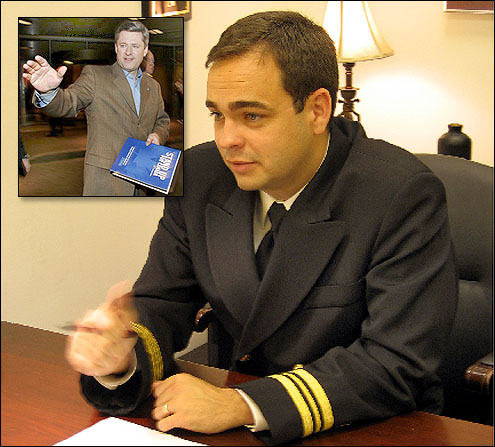 This is too funny for words:

Rush’s first appearance on American TV in 33 years. How’s that for making you feel old? Note: This may well get nixed for copyright violation, so the video could become a dead link before too long. 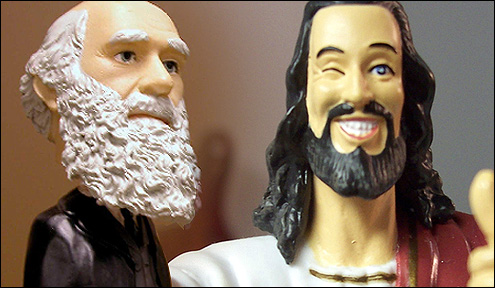 Writing in the New York Times the other day, the highly alluring evolutionary biologist Olivia Judson argues that the “insidious terms” Darwinism, Darwinist and Darwinian. should be abolished because they “suggest a false narrowness to the field of modern evolutionary biology, as though it was the brainchild of a single person 150 years ago, rather than a vast, complex and evolving subject to which many other great figures have contributed.”

Judson imagines the great man’s astonishment if we could travel back in time and fetch him to the present day:

Oh, there would be so much to tell him! A full list would take me weeks to write out. But the obvious place to begin would be the discoveries of genetics, especially DNA. We’d have to explain that cells in each organism contain a code describing how to build that organism, written in chemical form — DNA — that evolutionary forces are constantly rewriting. Indeed, the study of DNA allows us to see the action of natural selection on a molecule-by- molecule basis. We can see the genes where natural selection acts to prevent evolutionary change, those where it drives change and those where it has no effect at all.

Then there’s the fusion of genetics with natural selection, which has enormously expanded our understanding of how natural selection can work. For example, it has led to the discovery that natural selection does not just shape individuals — the length of a beak, the color of a fin. It can also act on family groups, and thus drive the evolution of cooperation and other altruistic behaviors.
The reason is that evolutionary success can now be measured in terms of the number of genes an individual contributes to the next generation. Anyone who dies without reproducing does not directly contribute any. But because individuals have some genes in common with their family members, they can make an indirect genetic contribution if they help their relations to reproduce instead of reproducing themselves. Such “kin selection” is thought to have contributed to the evolution of the social insects — especially, ants, bees, wasps and termites — where only a few individuals reproduce and everyone else looks after the offspring.

We’d want to discuss evolution beyond natural selection — the other forces that can sometimes cause (or prevent) evolutionary change. For although natural selection is the only creative force in evolution — the only one that can produce complex structures such as wings and eyes — it is not the only force that affects which genes will spread, and which will vanish.
And, and, and.

Of course, this is something that many people have been advocating for years. Perpetuation of the term is mostly due to the deliberate mendacity of creationists who would prefer that evolution remain forever stuck in the 19th century in much the same way their own primitive Bronze Age belief system is largely fixed in the distant historical past. Pointing to the sheer absurdity of term, Judson says that “Darwinian” evolution, is like calling aeronautical engineering “Wrightism,” and fixed-wing aircraft “Wrightian” planes after the famous pioneers of modern flight, Wilbur and Orville.

• Attention Bloggers: Please stop thinking your terribly witty post titles riffing off “a million dollars” in connection with this story are in any way original. Resist the urge!

• I’m just curious, when the Fraser Institute issues one of its reports, are they “lecturing us” too?

• Another teaser from the Ottawa Citizen about the mysterious “civil war” going on at the National Gallery that’s pitted the deputy director against the retiring director. I just can’t wait to find out what the real dirt is here.

• Oh, and here’s the latest JibJab video in case you haven’t seen the whole thing yet. It was all over CNN yesterday, but only a few seconds of it.

Times-bashing isn’t just for conservatives anymore. As countless self-appointed critics whack away at the Gray Lady, our correspondent searches for the cause fueling the rebellion.

Apologies to John Cole for the shameless rip-off.