It seems that Orders of Canada are not only being wiped on the soiled backsides of hateful religious extremists these days, they’re also now being returned from beyond the grave by aspiring Catholic saints.

Aside from being rude and disrespectful to all parties concerned, this really seems like the height of arrogant presumption to me.

Reid at “Right from Alberta” is somewhat bothered “that a group of people are using a dead person as a soapbox” — something that’s most certainly never perturbed the residents of this place: 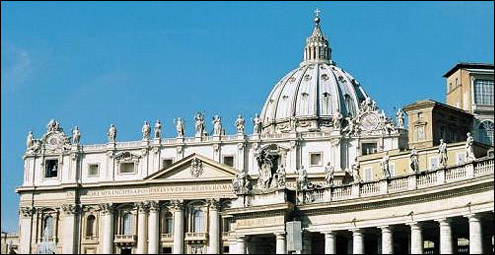 Well, quite a lot it seems when your entire argument about there being a pervasive “liberal bias” in the mainstream media turns on the use of a single word in one article.

Yes, the Trusty one is at it again. Having previously tried his hand at asserting that things clearly in evidence didn’t exist, he’s now taking the opposite tack of claiming that things not present really do exist!

According to Trusty, the use of the word “summoning” by the Reuters News Agency in the widely reported story of George Bush’s un-statesmanlike “Yo, Harper!” remark is proof positive of a nefarious “liberal bias” in the MSM.

In addition to being clueless about media relations, Trusty also doesn’t seem to understand headlinese, or the difficulties of creating short, punchy, dramatic headlines when he dumbly complains like this:

First and foremost, what the hell is with the misleading “Bush beckons, PM obeys?” [sic] A reader then clicks the story to have the headline “Bush summons Canadian leader with a “Yo Harper!” before being subject to a whole article of non-news.

Actually, we don’t even know where the screen shot and the “foremost” headline that seems to have irked the Trusty one so much comes from. Some website obviously, but unfortunately, we’re not told which one. It doesn’t appear to even be a proper news outlet. The only reason it’s worth mentioning is that it would then be possible to see what headlines normally look like on that site in order to have some point of comparison. But, I guess we’ll never know.

So let’s move onto the actual story and headline. As mentioned, though widely reported, it’s the Reuters version of the story that seems be the allegedly biased offender here because it used the word “summoning” as opposed to “calling for” (the AP version). This begs us to ask the question again: can Trusty actually read? He seems not to understand the definition of the word “summon” is, amongst others, “to call for.” In other words, the two things are exactly the same, although one could certainly draw a certain pejorative inference from “summoning” if one chose to.

Still, that’s a pretty slender reed on which the rest of Trusty’s rather incoherent diatribe hangs from. And sure enough, it’s just a lot of puerile silliness about the supposed “America-hating” of the mainstream Canadian press, which is made even more ridiculous by the fact that Reuters is based in London, England. But we’ve wasted enough time on this absurd man and his deeply uninformed opinions. Time to move on.

Wow. There’s just no stopping the G8 leaders when they seriously commit themselves to pretending they’re actually doing something about the challenging environmental issues confronting the planet.

Why it was just a scant year ago that the leaders created their first impression of pretending to do something when they vowed to “seriously consider” the goal of cutting emissions of greenhouse gases by 2050. And sure enough, an “important advance” has since been faked, err made, with the leaders demonstrating the kind of theatrical posturing far-sighted planning we’ve come to expect by courageously pledging to “share the vision” of the 2050 goal with hundreds of other nations.

I’m sure that it’s all going to make a ripping yarn of historical daring-do when the people of Aquaworld reflect on the past.

Note: For a completely delusional take on this, venture into the Crux of Insanity… if you dare! But be warned, you may get a little vertiginous from the sudden plummeting of your IQ.

The Edmonton Journal has a story this morning about the “Very tough road” ahead for Dion according to a recent poll. Subhead on the piece is “Liberal Green plan faces public hostility.”

The federal Liberals have a big sales job ahead of them on their proposed national carbon tax.

A new poll Monday said only one in three Canadians has heard about the “green shift” plan and 60 per cent, who can recall anything about it, say it’s “a bad idea.”

Hmmm. There’s something wonky with the numbers here and I’m not sure that it adds up to quite the level of widespread “public hostility” the Journal would have us believe exists.

We know that only about 33% of people have even heard of the Liberals’ so-called “Green Shift” carbon tax plan and are therefore dealing with a minority of the public already. Of this 33%, it seems that 60% of them couldn’t recall anything specific about the plan. So now we’re down 13% of people who might actually know something about the plan, which isn’t much as it turns out. Of that number, only 20% of those people knew that it involved a carbon tax and only 2% appeared to be aware that it had something to do with the environment (I find that figure very hard to believe).

But don’t get distracted with those numbers.

Let’s back up to the 13% of people who know of the “Green Shift” and can name something or other about it (i.e., they’re not altogether clueless) because this rather tiny group of people is what the Journal is focusing in on for their claims of “public hostility.” When looked at this way, the touted figure of 60% saying it’s “a bad idea” turns out in fact to be a rather creative translation of a mere 7.8% of Canadians that were polled in a single survey of questionable origin.

Can you make something out of nothing? Of course you can! Our so-called “liberal media” does it all the time.

Carole Kreck, a 61 year librarian, wanted to attend the John McCain town hall meeting being held yesterday at the Denver Center for Performing Arts. The event was billed as being open to the public and people were advised to arrive a few hours early.

While waiting in line, Kreck was approached by McCain’s security detail who told her to leave. When she refused, the police were called. They issued her a ticket for trespassing and escorted her from the premises.

And what was the problem with the 61 yr. old librarian?

She was carrying a sign that said: McCain = Bush.

Was Napoleon murdered? If so, by whom, and why? Was it the hated Sir Hudson Lowe, Napoleon’s British governor on St Helena? Or did the French King, Louis XVII, want Napoleon gone once and for all. And who on the island could possibly gotten close enough to do the dirty deed?

This documentary from 2000 follows the efforts of a Swedish dentist, Sten Forshufvud, as he looks for evidence to support his theory that Napoleon was murdered. The popular wisdom is that Napoleon died of stomach cancer. However, the presence of traces of arsenic in his system has led some historians to believe he was poisoned, probably slowly, by a member of his own court. Using the latest forensic techniques, Forshufvud tests his theories.

There’s a bit of a Canadian connection here as well in the person of International Napoleonic Society President Ben Weider, one of the pioneers of competitive bodybuilding who founded and runs a Montreal based physical fitness and sporting goods company bearing his name. Seems like a weird juxtaposition of interests, but he’s quite obsessed with the subject. For years Weider has made it his personal mission to get to the bottom of this mystery.

I got an image of the Order of Canada, crapped on it, wrapped it up and mailed it to the Governor General to communicate my utter contempt of her office, her arrogance, her anti-Christian/anti-life bigotry and the now corrupted and irrelevant Order of Canada in general.

This was Whatcott’s chosen form of “protest” to Dr. Henry Morgantaler’s recent appointment to the Order of Canada, the ranks of which, according to Whatcott, are disproportionately filled with “leftist, pro-homosexual, pro-abortion, anti-authentic Christian, types.”

Makes me relieved to say that I am not, nor will I EVER have anything to do with this iteration of the Conservative Party that welcomes and condones these kinds of people as active supporters.